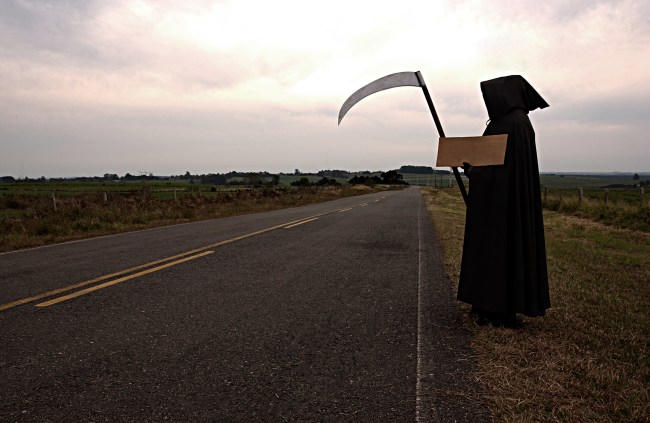 The beaches in Florida are opening up. Jacksonville opened up its beaches last week during limited hours. My hometown of Sarasota is opening up the Siesta Key beaches but they’re not opening the parking lots in an effort to keep the beaches less populated which is an idea I’m sort of on board with, in theory. It will certainly ensure the beaches stay less busy and stop people from posting up on the sand with a ton of chairs and coolers but in practice, it means you have to be fortunate enough to live within walking or biking distance of the beach in order to enjoy them.

Beaches all across the state are opening up despite the fact that there are still hundreds of new cases each day in Florida. The daily new cases are down from the beginning of April but there were nearly 900 new cases yesterday.

One Florida Man is taking a stand against these crowded beaches (in Jacksonville and elsewhere) by dressing up as the Grim Reaper and he’ll be visiting beaches across Florida to remind complacent Floridians about the very real dangers that still exist. According to The Inertia, Florida lawyer Daniel Uhlfelder got this idea from The Swim Reaper in New Zealand (below) who travels around to NZ beaches and imparts wisdom on people.

Dan Uhlfelder says he’ll begin hitting up beaches across Florida on May 1st and other areas of the Sunshine State that are opening up prematurely. I can’t believe I’m saying this but it’s nice to know that The Grim Reaper scaring people into staying home is the hero we need when selfish fools like this guy are holding boat rallies to open up the state before it’s safe to do so.

Many of you have asked if I am willing to travel around Florida wearing Grim Reaper attire to the beaches and other areas of the state opening up prematurely. The answer is absolutely yes. Beginning May 1 we will hit the road here in state. Please retweet and spread the word. pic.twitter.com/UO7QKg161n

The Grim Reaper Tour will spread out all across Florida and I’m sure there will be notifications in the coming days about which specific beaches he’ll be visiting. My guess is he’ll venture to Jacksonville first which has been open for a week and has led to photos of crowded beaches with people not adhering to suggested distancing guidelines.