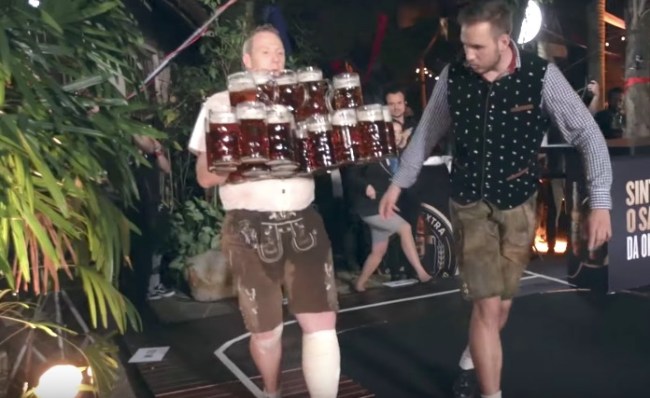 Germany’s Michael Sturm walked his way into the book of Guinness World Records during an Oktoberfest event in Brazil. He became the first man to carry 26 full beer steins over 40 meters (about 44 yards or 131 feet). In doing so, Michael Sturm earned himself a world record for one of the most impractical skills imaginable, but one that’ll impress just about any person sitting at a bar.

In order for the Guinness World Record to be certified/completed, Michael Sturm needed to cross the finish line with 90% of the beer that he started with. This allowed for a minor amount of spilling (10%). Over the course of 131+ feet it would be easy to spill half the beer given how much he was carrying, so it’s pretty remarkable that he was able to spill less than 10%.

Prior to setting the new Guinness World Record at 26 full steins, Michael Sturm actually tried (and failed) to set the record by carrying 28 steins. There’s no shame in coming up 2 short and having to start over when you’re carrying that much beer. If you noticed the bandage on Michael Sturm’s that’s from his attempt of 28 steins. During that attempt, he dropped the beer, shattered glass everywhere, and cut his knee (hence the bandage). So, big ups to Michael for pushing through that snafu and setting a new Guinness World Record!