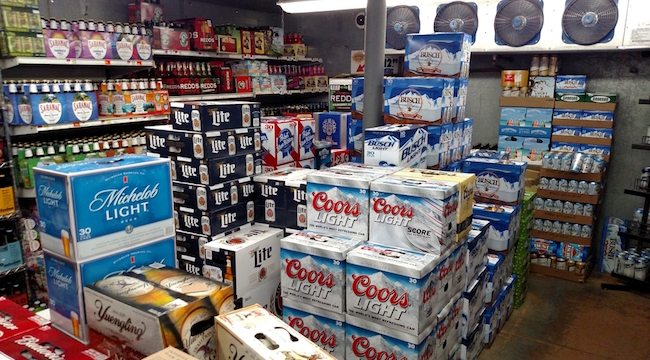 It seems like there’s some Greek prefix out there to describe virtually any phobia a person can have, but according to my not-even-close-to-exhaustive research, there still isn’t a word to describe the deep-seated fear of getting locked inside a walk-in cooler or freezer. I’m not sure who’s in charge of naming phobias, but someone should probably get on that.

On Tuesday, a Wisconsin man named Jeremy Van Ert lived many people’s nightmare after wandering into the beer cooler at his local Kwik Stop before the door automatically locked behind him (the store doesn’t sell alcohol past midnight). While many people would panic in this situation, Van Ert managed to remain cool— although it’s not like he had any other choice (insert rimshot here). After assessing his options, he decided there was only one thing he could do: start drinking. And drink he did.

Van Ert started the night off with a bottle of Icehouse, but soon realized he was going to need something a little stronger if he was going to make it through the night. Over the next six hours, he proceeded to drink three cans of Four Loko (I apologize if reading the words “Four Loko” just made you involuntarily gag).

A customer finally noticed Van Ert inside the cooler around 6 AM before an employee released him from his frigid prison. You might think that’s the end of this story, but we’re just getting started.

Remember when I said Van Ert assessed all of his options? Well, that wasn’t exactly true. The door of the cooler was made of glass and the store is open 24 hours a day, which means that Van Ert could have gotten let out at any point during the night if he’d made an effort. He also left the store without paying for the beer he drank and left behind three cases of Busch Light that were damaged when he knocked them over at some point during his bing.

Police ended up charging Van Ert with a misdemeanor, but I personally think his only punishment should be having to deal with the hangover that comes with drinking three cans of Four Loko.