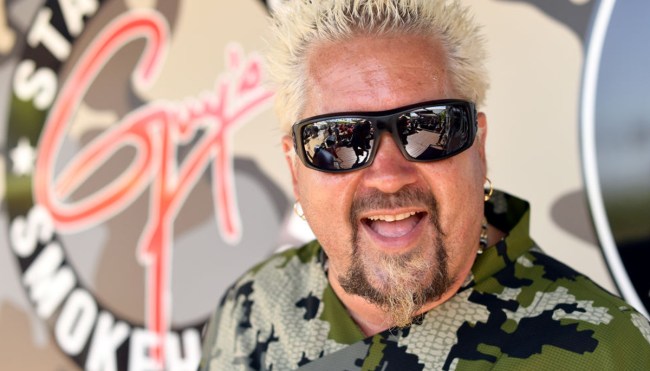 As someone with a crippling procrastination issue, my go-to Halloween costume tends to be “whatever I can whip up after combing through my closet an hour before I’m supposed to head to a party.” Sure, I tell myself this year will be different whenever October rolls around, but that rarely ends up being the case.

However, 2021 may finally be the exception to that rule courtesy of the must-have Halloween costume of the season that’s currently being sold by the man, the myth, and the legend who is Guy Fieri.

You don’t exactly have to be a master cosplayer to assemble your own Guy Fieri Halloween costume; if you can track down a bleached wig, a pair of Oakleys, and a bowling shirt, you basically have everything you need to transform into the Mayor of Flavortown.

However, that requires more time and effort than it takes to visit Fieri’s online store, which is selling a Mayor of Flavortown costume you can don to channel Fieri on Halloween if you’re willing to shell out the $70 it’ll set you back.

Over the weekend, the Twitter account that specializes in posting memes and pushing merch inspired by Fieri responded to a viral (and Photoshopped) photo of a “Governor of Tasteville” costume at a Spirit Halloween store by unveiling an officially licensed version.

If you decide to pull the trigger, you’ll get a box containing everything you need to become Guy Fieri thanks to a kit that includes “a matching button-up shirt and shorts, visor with replica wig, sunglasses, and face paint stick.”

In the immortal words of Fieri himself: That puts the shama lama in ding dong.