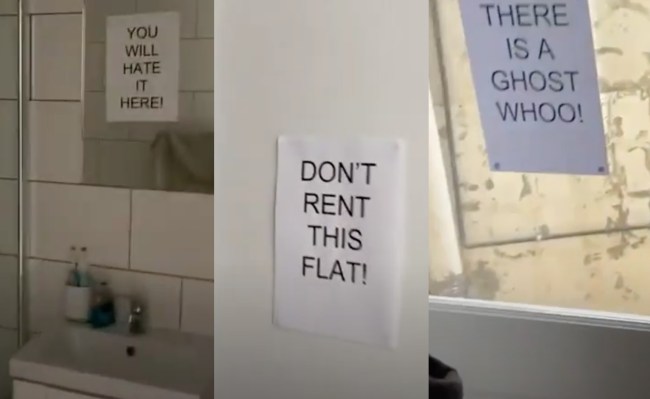 Things are tough all over. There’s nothing new that I can say about this that you haven’t heard already. Tenants are struggling to pay rent, landlords are struggling to collect rent, and everyone is pointing fingers at the other person for being the bigger jerk.

I don’t know what the back story is but the story we’re being fed is the tenant is essentially being forced to move out. Given the majority of renter’s experiences, I think we’re led to believe it’s because the rent is getting hiked up to a point that the current tenant can’t or won’t pay it.

The icing on the cake here is the landlord has asked the tenant to film a video of the property so that prospective tenants can get a feel for the place. Just let that sink in: the person’s being forced out of their building and the person in charge of giving them the boot is like ‘hey guy, can you make this place look awesome so that we can get someone fresh in here???’

The guy filmed a masterful video and shared it on Twitter where it went viral overnight and has racked up several million views in a hurry. You can hit that play button on the tweet below to see this work of art. Sometimes I need to hit the ‘play’ button twice in order to get it to work but I’m sure you’ve figured that out by now. you can also find the video directly on Twitter right here. Someone also re-shared it to YouTube (below as well) but I’m unsure if that’s the original creator’s channel.

Our letting agent asked us to make a video of the flat we are basically being forced out of. I wish them the very best of luck. pic.twitter.com/h3fcOw657w

Our letting agent asked us to make a video of the flat we are basically being forced out of. I wish them the very best of luck. pic.twitter.com/h3fcOw657w

It’s the little victories in life that keep us going, isn’t it? Sure, he might have to pack up all his belongings and move out of an apartment he clearly didn’t love but at least he got to shove it to the landlord on the way out the door.