Here’s The First Trailer For ‘Hereditary,’ A Film Being Called ‘The Most Insane Horror Movie In Years’ 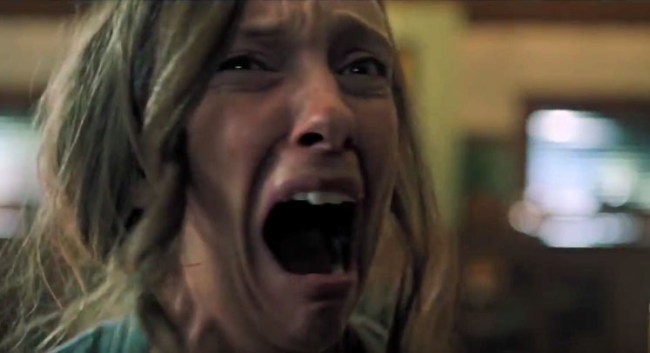 An upcoming movie by A24 called Hereditary, starring Toni Collette, Gabriel Byrne, Ann Dowd, and Alex Wolff is being called “the most traumatically terrifying horror movie in ages.”

Vanity Fair called it “a terrifically unsettling look at the howling despair of grief, combined with that good, old-fashioned fear of what demons we may have inherited from our parents.”

Time Out gave described the movie like this: “A harrowing story of unthinkable family tragedy that veers into the realm of the supernatural, ‘Hereditary’ takes its place as a new generation’s ‘The Exorcist’ — for some, it will spin heads even more savagely.”

A.A. Dowd of The AV Club, who provided the harrowing description in the opening sentence of this article, also said of Hereditary, “It’s hard for me to imagine seeing a more frightening movie this year — especially after the full-bore climax, which features images that will stay lodged uncomfortably in my mind (and possibly my bad dreams) for who knows how long.”

In fact, Hereditary is SO scary that it’s USA Today called it “the most insane horror movie in years.”

I just saw the scariest movie I have ever ever ever seen in my entire life. I. Am. Shook. #Hereditary #Sundance

Is there such a thing as “too scary?” #Hereditary #sundance

HEREDITARY is pants-wetting unnerving. The more I think about it, the more questions I have, and it could be much tighter, but it's still a hell of a cardio workout. Also, Toni Collette is a cinematic champ. #Sundance

HEREDITARY is so disquieting, you’ll be gasping for air in the theater. Utterly believable supernatural horror. There will be no scarier movie this year. If there is, it means we’re in a new golden age. #Sundance

That’s… a lot of hype. Here’s the synopsis…

When Ellen, the matriarch of the Graham family, passes away, her daughter’s family begins to unravel cryptic and increasingly terrifying secrets about their ancestry. The more they discover, the more they find themselves trying to outrun the sinister fate they seem to have inherited. Making his feature debut, writer-director Ari Aster unleashes a nightmare vision of a domestic breakdown that exhibits the craft and precision of a nascent auteur, transforming a familial tragedy into something ominous and deeply disquieting, and pushing the horror movie into chilling new terrain with its shattering portrait of heritage gone to hell.

And here’s the pants-sh*tting trailer…