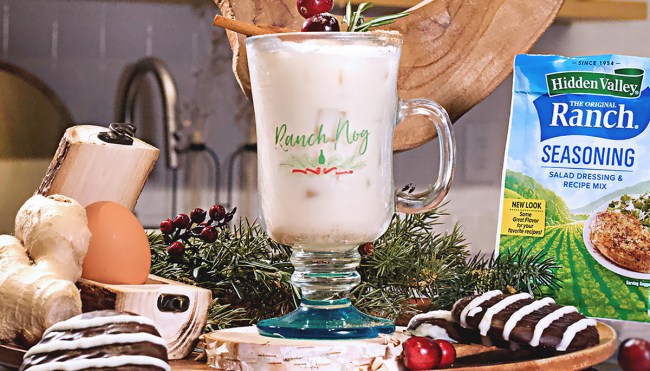 There aren’t many things that help me get in the holiday spirit quite like the copious amounts of spirits contained in a typical batch of eggnog, as there’s nothing quite like a night of questionable decisions fueled by too many glasses of the winter staple.

You can technically consume non-alcoholic versions of the quaff that’s traditionally made with a combination of cream, sugar, and (yes) eggs, but my mentality has always been that if you’re going to subject your arteries to that mixture, you might as well invite your liver to get in on the action as well.

Most people kick eggnog up a notch with the addition of a mixture of various spirits—I had a family friend who relied on a recipe with a list of liquors so long it would’ve been easier to just say the types of booze he didn’t harness—so while there may be a differing of opinions concerning exactly what should be used, I’m pretty sure basically everyone on the planet would agree there are certain things that should never be thrown into the mix.

For example, I can’t imagine many people were begging for eggnog that tastes like ranch dressing, but thanks to Hidden Valley, that’s now a thing that sadly exists. According to Food and Wine, the company is selling a limited-edition “RanchNog Kit” for $50 a pop, which includes a jigger, two branded glasses, a couple of packets of ranch seasoning, and a recipe for the drink that was dreamed up by the complicit mixologists at Whiskey & Rosemary.

As you’d expect, plenty of people online are less than thrilled with this development.

I like ranch, I like eggnog.
Fuck this, this is crime against mankind. It’s creators should be spoken the same breath as the worst people of human civilization. I may not buy ranch anymore just because of this https://t.co/d2FgJwHOuk

I just heard about RANCHNOG on the radio and…

*walks up to replicator*
Ranchnog, hot.
*gets immediately shot out of airlock* https://t.co/4P9EpYaLgC

Every day we stray further from God’s light.