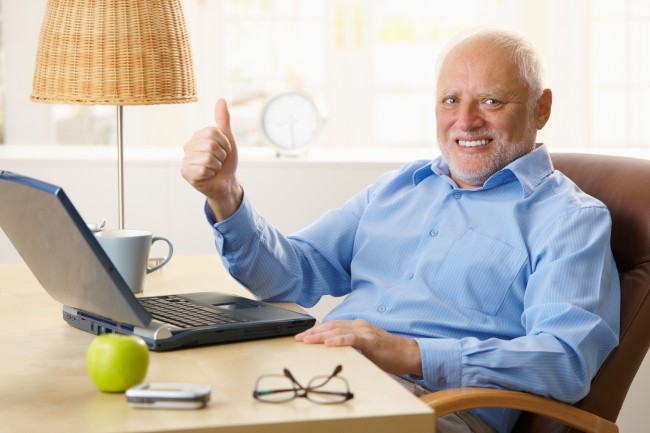 About a decade ago, an electrical engineer named András Arató was contacted by a professional photographer who had come across the man’s holiday pictures. He said he was looking for someone to appear in a series of stock photographs and the man was flattered. Who wouldn’t enjoy being contacted by a photographer because that person liked their face, right?

Flash forward and those stock images would birth the ‘Hide the Pain Harold’ meme. The images of his face where you couldn’t tell if he was smiling with genuine happiness or in an attempt to hide the pain lurking underneath. You’ve probably seen thousands of memes with his face.

As an electrical engineer for 40 years, András Arató never set out to become a meme. Nor did he think he’d wake up one day to strangers knowing him has ‘Harold’ and that he’d be living a globe-trotting lifestyle where he’d be recognized all across the planet. But that’s the state of things for him these days.

András Arató wrote an article for the Guardian UK about how much his life has changed since his face became a world-famous meme and some of the excerpts are pretty wild. His wife hated everything, and then he got paid.

My wife hated it: she thought it interfered in our private life and didn’t like the way I was portrayed. People thought I wasn’t a real person, that I was a Photoshop creation – someone even got in contact asking for proof that I existed. (via)

It was in 2017 when András Arató created his own Harold fan page on Facebook that he was finally able to cash in on these famous memes. By taking ownership of the meme, Harold started getting contacted with work offers:

That started everything going. People noticed that I had taken ownership of the meme and got in contact to offer me work. I was given a role in a television commercial for a Hungarian car dealer. In one of the adverts, I travelled to Germany to buy a used car and it broke down halfway home; if I had bought the same car through their company, the brand claimed, it wouldn’t have happened. The fee for that commercial changed my wife’s mind about the meme. (via)

Since taking ownership of the Harold meme, he’s been flown to England to make a video about the Manchester City soccer team where he got to tour the facilities and watch them play in a Champions League game. He was flown to Germany by ‘mail-order giant Otto’ to film commercials.

He needs security these days:

Last year, I took 20 flights from Budapest to destinations all over the world: Europe, Russia and, increasingly, South America. Last month, I travelled to Chile and Colombia for some TV appearances; that was the first time I felt like a real celebrity. Every time I walked down the street a crowd would gather, so they gave me bodyguards. I’ve never enjoyed a fame like that before; sometimes it was frightening. (via)

He told the Guardian he’s the face of Totum, a discount card for students. There’s a Hungarian band named Cloud 9+ who has immortalized him in a song titled ‘Hide the Pain.’

He’s even given a TED talk:

Now that he’s fully embraced his new life as Hide the Pain Harold, a living meme, he says he’s using his stardom for good:

We’re also using the meme for good. We want it to be more than just a sad smile. I am the face of a campaign for a mental health service in Hungary, similar to the Samaritans in the UK. I’m proud that something more has come out of the last 10 years than just an idiotic smile. (via)

He finishes off the article exactly as you’d expect any 74-year-old who fell into money and become an overnight celebrity late in life would. He says the ‘Hide the Pain’ is all role play for him and “I’m not actually a sad guy – I think I’m rather a happy one.”

I would be too if I’d retired and then got paid to travel around the world so people could use my face in their commercials. That’s not a bad way to live out retirement, travel for free and get paid on top.

To read his full article, you can click here.