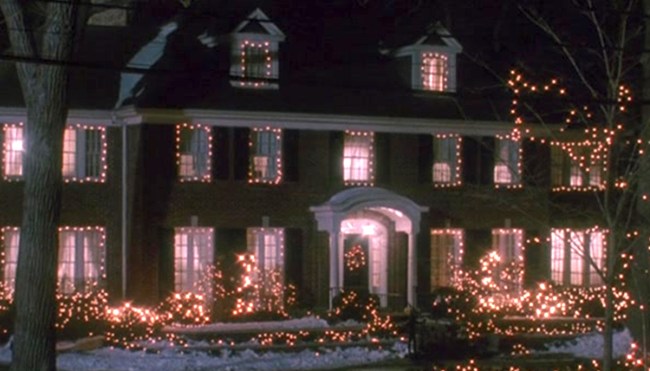 There is perhaps no Christmas movie that deserves the title of “modern classic” quite like Home Alone, a film that has allowed millions of children to live vicariously through the wacky misadventures of eight-year-old Kevin McAllister after his family casually forgot about him before heading out on a holiday vacation to France.

The majority of Home Alone takes place in the borderline mansion located in the ritzy Chicago suburb that was cased by the Wet Bandits, who ultimately had their plans of a Christmas caper spoiled by the meddling kid who transformed the massive home into a fortress rigged with booby traps spawned from the mind of their pint-sized nemesis.

In real life, the house where the McCallister family resided is located in Winnetka, Illinois. When it was sold in 2012, the lavish 4,200-square-foot property (which is home to five bedrooms—including a four-room master suite) fetched $1.585 million. While it hasn’t hit the market since then, a few lucky people will have a chance to channel their inner Macaulay Culkin for a night courtesy of Airbnb.

On Wednesday, the company announced Home Alone fans will have the chance to book the house for one night only on December 12th (the listing will officially go live on the 7th). If you’re lucky enough to snag the coveted reservation, you’ll only have to shell out $25 for a stay that is “hosted” by none other than Kevin’s brother Buzz.

A listing written in the voice of the former teen with a woofable girlfriend describes what you can expect during your stay, as guests will be invited to watch his pet tarantula, construct their own booby traps, put together the equally coveted Lego set inspired by the house, and chow down on a pizza delivery facilitated by the security team that will be there to keep the Wet Bandits at bay.

Best of luck, ya filthy animals.