Hoskins Plays The ‘Game’ He Dreamed Of As A Teenage, For Him And Others To Play As Well 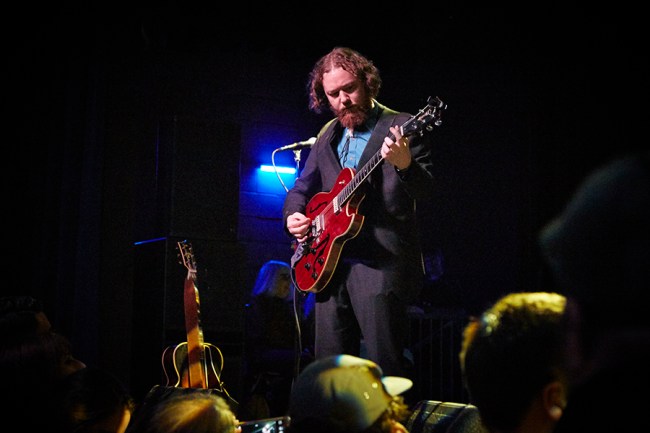 It would be a vast understatement to suggest the music community has become embittered over the past 20 years. Beyond the inability for artists to earn a living making records any longer, there’s been the likes of “American Idol,” the “The Voice” and YouTube and TikTok have created instant fame for so-called musicians—putting millions in the pockets of otherwise anonymous, arguably less talented performers.

So it goes, it is what technology hath wrought, and the music industry will never be the same. Yet, there remain thousands upon thousands of anonymous, remarkably talented musicians plodding through the industry, honing their craft day-after-day—doing it for the love of music. They slave away in studios, making exceptional music that oftentimes goes unnoticed, or at the very least, without celebration; and perhaps even teach others their craft as a means to find inspiration or simply get by.

One such exceptional musician is Adam “Lightnin’” Hoskins of St. Louis. The 35-year-old guitarist—who could be mistaken for the late Cream drummer Ginger Baker from afar—has been making his mark playing guitar for more than 20 years.

“I feel happy that I’ve been able to make it in that way, even if just for a moment,” he said. “The moment is wonderful. I’m a fan first, before I’m a musician, and it’s been fulfilling the dream of a teenage me. I’m honored.”

More often than not, Hoskins has flown under the radar. But people in the business know him. An avowed ragtime fan, Hoskins traces his influences deep into rock’n’roll, country, blues and traditional jazz.

He was a founding member of the renowned Pokey LaFarge & the South City Three, which won the Independent Music Award for Best Americana Album on their first two records. The band then released the Jack White-produced album Chittlin’ Cookin’ Time in Cheatham County, after-which White asked the band to collaborate with him on the song “I Guess I Should Go to Sleep” for his Grammy-nominated album Blunderbuss, followed by opening for White on tour.

Plus, there are the countless shows and audiences across the U.S. and Europe Hoskins has somewhat anonymously entertained over the years—from the Edenborough Fringe Festival to the New Orleans Jazz & Heritage Festival, Bonnaroo, Red Rocks, playing live on Letterman and Conan, and the list goes on.

As it has impacted the entire arts community, COVID sidelined Hoskins from working on Maximum Effort, his award-winning punk band that he hopes to use to spread the truth about conspiracies, government cover-ups, and social injustices.

And while making his mark as a guitarist, he is a multiinstrumentalist, playing upright bass, electric bass, lap-steel, banjo-uke, claw-hammer banjo and mandolin; while spending much of his free time producing, engineering, arranging and even teaching young pupil’s guitar.

I should know, after all. He taught me how to play guitar and about one year later I started Atomic Junkshot, largely due to the skills Hoskins imparted upon me.

And while teaching, at least initially, was not his first choice—it’s become a deeply rewarding endeavor and he savors the ability to give to others, what was once given to him.

“At first I taught out of necessity,” Hoskins said. “But now it’s out of a love for the community. I’ve gotten so much out of music that it’s time to help others play the game as well.”