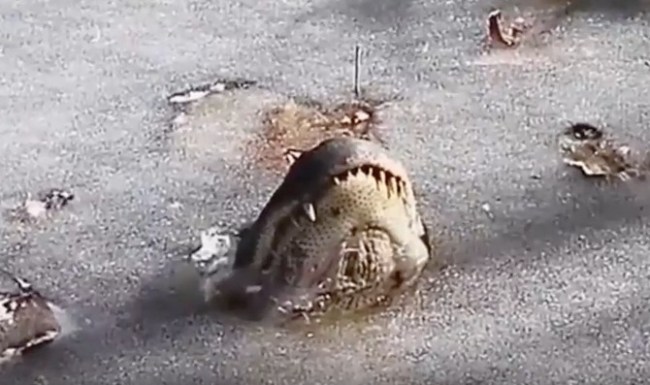 It’s cold outside up and down the East Coast of America. Not so much down here in Sarasota, Florida where it hit 70+ degrees yesterday (forecast calls for a high of 75F today). But, I was in Boston for about 12 hours on Friday in single digits where I was forced to walk outside of the airport wearing a sweater and I can’t even imagine how f’n tired you all are of the cold by now after weeks of frigid temps. You know who else is cold? The cold-blooded alligators.

Footage from the Shallotte River Swamp Park in North Carolina has gone viral over the past few hours. It shows how these cold-blooded alligators survive when a pond freezes over. In this instance, the pond at the Shallotte River Swamp Park has frozen solid and the ‘gators are literally freezing themselves in place with their snouts poking out of the ice so they can continue to breathe oxygen without being able to bring their entire bodies up to the surface for warmth.

The alligators seem to instinctively know when the water is about to freeze, experts say. They respond by sticking their nose above the surface at just the right moment, allowing the water to freeze around it.
The alligators then enter “a state of brumation, like hibernating.” Alligators can regulate their body temperature in all sorts of weather, park officials said, and can essentially remain frozen in place until the ice melts. (via)

If you want to read up on what ‘brumation’ is you can click here for a good explanation of that phenomenon. Essentially, it’s a form of hibernation for cold-blooded creatures.