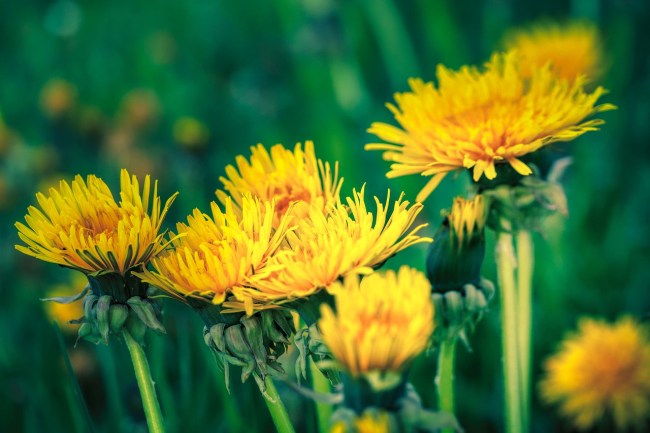 If there is a bit of nostalgia that comes floating to the surface of this old soul this time of year, it’s when the dandelions start sprouting up all over the yard. Not only do these patches of yellow flowers tell us that winter is finally in the rearview and that one hell of a summer is about to get underway, but they also taunt those of us holding a Ph.D. in redneck science with the desire to make booze.

The pissenlit, as it is aptly referred to by the French, is often considered a lawn pest to the uptight Joneses with 2.5 kids and matching suburban homes. These bastards will spend beaucoup bucks on weed killer and specialty lawn care services to eliminate them from existence.

They are dumbasses. If they only had a little country coursing through their veins, they would clearly see these blooms as an opportunity to get hammered beyond belief. Believe it or not, dandelions can be made into homemade wine. It’s a relatively straightforward process, too, and a lot of folks likely have all of the necessary gear to start brewing a batch at home right now.

But before we get into the specifics, let’s take in some background.

Dandelion wine is one of those old school concoctions that the poor European man used to drink when times got hard. It was sort of the Mad Dog 20/20 of its time, only (much like Mad Dog) to label it “wine” is a bit of a stretch. I mean, it does have a sweet, floral flavor but the beverage comes for your brain cells with the gnashing teeth of cheap liquor.

While you’ll probably never hear any of the country bumpkins who brew this stuff every year call it anything other than wine (traditionally defined as something that is distilled from fruit juice), those with a more traveled palate might describe it as more closely resembling a decent bottle of brandy. It’s just as potent (roughly 13%), so don’t think for a second that dandelion wine is a sympathetic drink just because it is derived from wildflowers. Make no mistake about it, fellas: this shit will straight knock your dick in the dirt.

But that doesn’t mean the beverage is dangerous and should be feared. After all, dandelions are highly nutritious flowers that are loaded with vitamins, minerals, and fiber. They also contain strong antioxidants that can aid in fighting inflammation, high cholesterol, high blood pressure, and—get this—they can even improve liver function.

That’s right. Lawn hooch is liver-friendly. While the booze we typically pour down our gullets is pickling our livers one sip at a time, some research has shown that homemade dandelion wine might actually help this vital organ recover and keep it in tip-top shape. So just in case the thrill of brewing alone wasn’t enough to pique your interest in this process, perhaps the therapeutic properties might. Just think of it as a medicinal retreat of drunkenness.

The first thing anyone thinking of brewing dandelion wine is going to need is a metric shit ton of dandelions. Well, maybe not that much, but the recipe does require around a gallon of flower per gallon of water (slightly more than a gallon, actually). So for the sake of this article, let’s just focus on making a one-gallon batch.

Here’s what you need:

If you have spent anytime whatsoever during this lockdown period learning how to brew your own beer, chances are there is a fermenter lying around that can be used for dandelion wine. If not, never fear. You can purchase one on Amazon for under $15 that comes with everything you need to make one gallon. They’re cheap, so buy two. You’re going to need another one to store the wine in for another round of fermentation.

While you’re at it, go ahead and get a restaurant-grade, no-rinse sanitizer (I use this one). We want to make sure that our fermenting equipment is free of bacteria, proteins, and other toxins for the best possible brew.

Once you’ve got everything assembled, all you have to do is follow these eight simple steps.

Unfortunately, it’s going to be several months before you get to enjoy the drunkenness of your labors. Dandelion wine must be stored in a cool spot (basements are ideal) to age for six months before it is ready for consumption. You might be able to get away with only aging it for two months, but I wouldn’t risk it. Leave it alone for as long as possible.

Back in the day, we typically brewed for the following summer. That means the dandelion wine you make in the next month or so will be at the right maturity for drinking once the flower starts to bloom again next year that you can use to toast the start of a new annual tradition.