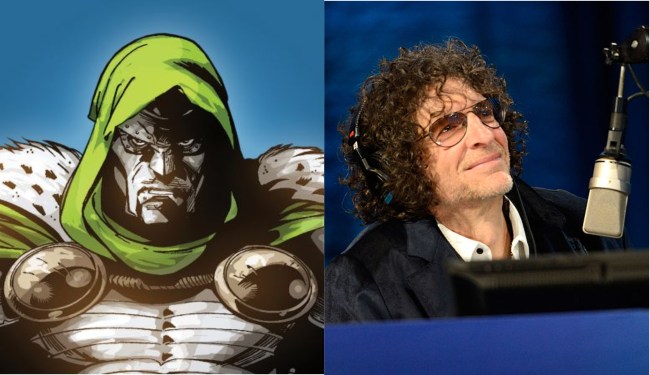 A day after making headlines by saying he’s considering running for President of the United States, famed radio host Howard Stern is back in the news today, albeit for an entirely different reason.

During a recent episode of The Howard Stern Show, a hot mic picked up the 68-year-old saying that he’s working on something related to Doctor Doom this summer. Doctor Doom, of course, is one of the most iconic villain in the history of Marvel Comics.

Given Stern’s age — and acting profile — there’s a zero percent chance that he’s the one PLAYING Victor Von Doom in whatever he’s talking about.

“Are you working this summer? ” co-host Robin Quivers can be heard asking.

“I told you, I’m going to do Doctor Doom,” Stern says before the ad playing over him makes what he’s saying unintelligible.

Holy shit Stern had a hot mic for their postshow meeting running and I think leaked he will be doing Dr. Doom in an MCU movie?!?? pic.twitter.com/fIzH1Z7KAJ

If true, the news is obviously exciting for fans of the Marvel Cinematic Universe as Doctor Doom — a direct rival of the Fantastic Four, who will also make their MCU debut in the coming years — is one of the most celebrated villains in the history of comic books. The character also presents the MCU with an opportunity to do something they’ve never quite done before and that’s a true anti-hero and/or villain origin story film.

One this is for certain, though: given the famed secrecy that shrouds the MCU, Marvel Studios President Kevin Feige certainly won’t be thrilled about this news breaking thanks to a hot mic error if it is indeed true.