The Internet *Absolutely ROASTED* The Latest Clip From ‘Star Wars: The Rise of Skywalker’ 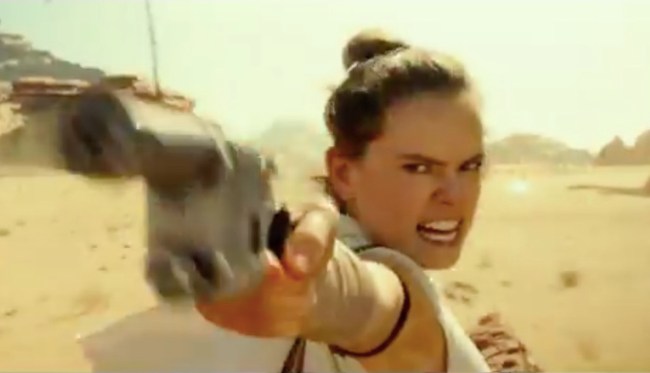 If I’m Disney, I’m soaking in all of this positive Star Wars energy that’s been built up around The Mandalorian now, because I have a feeling that come the new year, the tune of fans is going to sound a whole lot different.

Yesterday, Star Wars released a new 30-second clip from The Rise of Skywalker that featured Rey, Finn, Poe and the rest of the gang on the run from jetpack-wielding Storm Troopers and the reaction on Twitter was, uh, less than positive, to say the least.

Check out this clip from #StarWars: #TheRiseOfSkywalker. See it in theaters December 20. Get your tickets: https://t.co/EbJ0vDHKyt pic.twitter.com/ZAzp77ZLz0

Essentially every Tweet reply to the clip rips it in some way, shape, or form. Whether it be the corny, lowbrow, Marvel-esque dialogue, the fact that Finn — a former Storm Trooper — doesn’t know that they “can fly now” — or the general frustration that has been built up from the previous two films, Star Wars fans seem to be more out than ever on their beloved space opera franchise.

Imagine buying one of the most culturally significant properties ever made and running it into the ground in less than 10 years.

Me: I hate Star Wars since The Last Jedi.

Also Me: Okay, I'll give #TheRiseofSkywalker a shot.

Was that a CGI Stormtrooper.🤔 pic.twitter.com/gVBx15kU3Z

Note to JJ: The First Order (that HE created) already had Rocket Troopers that Finn would have known about…

What kind of Mickey Mouse organization are you guys running over there? pic.twitter.com/DRVSRa5R6B

Yeah I’m rooting for the first order. The resistance is horrible.

Poe is an experienced soldier and yet for some reason it's a surprise to see enemies using jetpacks? I'm starting to see why the Resistance is losing now tbh.

OMG!!! That was hilarious! Now show us a real clip, cuz surely you didn't ACTUALLY put that scene in the movie, did you???? DID YOU!!!

On top of the subpar reaction to the trailers and clips that have been released thus far, there have also been long-running rumors of production issues, as the film reportedly underwent “substantial reshoots.”

At this stage, barring something miraculous, it appears as though Star Wars: The Rise of Skywalker is destined to be underwhelming to Star Wars lovers across the globe. While I’m crossing my fingers and hoping for the best, it seems more likely than ever that the final chapter of the Skywalker Saga is going to be a disappointment.

Star Wars: The Rise of Skywalker — the ninth and final installment of the Skywalker saga — is directed by J.J. Abrams (who also directed Star Wars: The Force Awakens) and will star Daisy Ridley, John Boyega, Oscar Isaac, Adam Driver, Mark Hamill, Carrie Fisher, and others in their famed Star Wars roles.