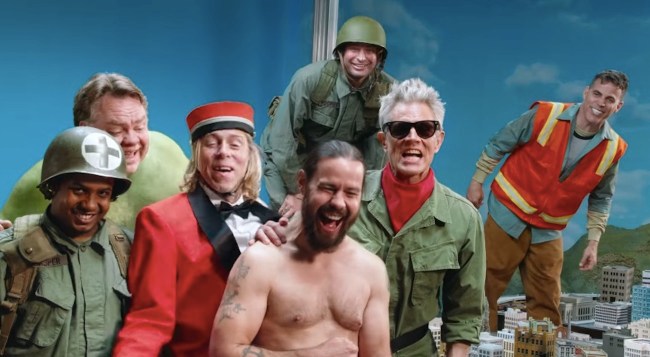 Have you ever seen that tweet that goes something like “Before memes, guys just quoted Anchorman at each other for hours on end”? Similarly, before YouTube and streaming, guys would just rewatch endless hours of Jackass, MTV seminal stunt franchise.

Back in 2010, when Jackass 3 hit theaters, fans of the beloved franchise largely thought that would be the final go-round for their favorite tricksters given their increasing ages and the toll that being a member of the Jackass crew took on their bodies. Johnny Knoxville, the face of the franchise, has famously suffered over 15 concussions. Ehren McGhehy has broken his neck and Steve-O has fractured his skull. All told, the Jackass crew have sustained a total of 79 injuries, 28 of which were broken bones. It’s that very commitment, though, that’s what made them such a beloved staple of millennial culture.

Alas, because you can take the boys of out Jackass but you can never take the Jackass out of the boys, the OG gang has gotten back together for one final, epic outing — Jackass Forever — that will hit theaters on February 4.

With the release of the film just under a month away, Paramount Pictures has dropped the final chaotic trailer for the film and it’s the exact sort of “kickback, unplug, and crack up” energy we all desperately need right now.

After being delayed a handful of times since it was officially announced back in December 2019, Jackass Forever will finally hit theaters in the United States on Friday, February 4.