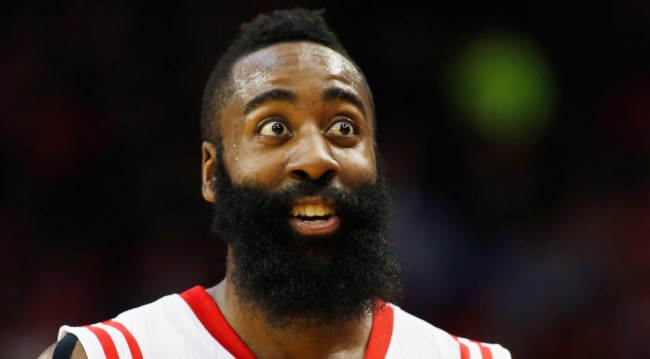 James Harden dropping $1 million at a Houston Strip Club and getting his jersey retired in the process is one of the greatest stories of the past five years or so. Three years ago, Joe Budden was the first to share the news of Harden’s jersey hanging from the ceiling of the establishment that had the luxury of hosting the star shooting guard for a night.

I still have so many questions and thoughts on this situation here. First off, who knows if Budden’s podcast is the most reliable source as it seems this guy has a new breaking story every week. However, James Harden is still an absolute savage. Shame on this strip club for only going as far as hanging the guy’s jersey up. One can only wonder if it will be the only time Harden’s jersey will be retired as it doesn’t look like he will be bringing a championship back to Houston anytime soon, just saying.

This strip club should be totally renamed and revamped in honor of James Harden, there should be an entire section dedicated to this man. Do you realize how much energy you have to exert to throw $1 million dollars worth of dollar bills on the ground?

If you aren’t a fan of Harden that’s okay, because I can assure you there are a couple of strippers running around the city of Houston right now that are a fan of his. As a guy who puts a hard two lap dance limit on any strip club appearance I make, I have no choice but to tip my cap to the NBA superstar on this one. I want to give a big congratulations to whatever strippers who just happened to be in the right place at the right time that night.