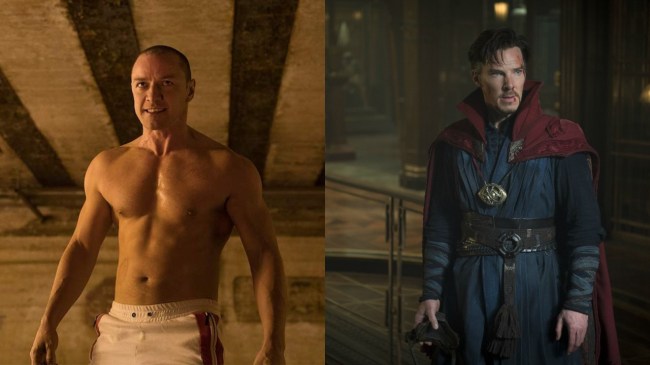 Since the announcement of Marvel Studios’ Phase 4, perhaps the most interesting project on their slate of upcoming films is Doctor Strange In The Multiverse of Madness, as it’s set to be the first “horror” movie set in the Marvel Cinematic Universe.

Set to be released in 2021, rumor has long been that Doctor Strange In The Multiverse Of Madness would feature Nightmare, the ruler of the dream dimension, as the film’s primary antagonist.

Given that Doctor Strange In The Multiverse Of Madness is apparently going to take a step outside of the traditional MCU framework, Marvel Studios is wisely looking to cast an A-lister for the film’s main villain.

And according to recent rumors, James McAvoy (X-Men: First Class, Glass, IT: Chapter Two) is on the top of the studios’ wish list.

According to this new leak (via 4chan), Marvel is casting the net wide to find the perfect actor – or actress – for the part.

As per a 4Chan post that was soon deleted, but also shared on Reddit, a host of high-profile names, both male and female, are being eyed for Nightmare in Doctor Strange 2. Actresses under consideration allegedly include Eva Green, Natalie Dormer, Emily Blunt and Claire Foy, while the actors Marvel is eyeing are Ewan McGregor, Dan Stevens, Jared Leto and James McAvoy, among others. [We Got This Covered]

For my money, McAvoy is currently one of the most talented A-listers working today, so nabbing him for a villainous MCU role right off the heels of his multi-film run as Charles Xavier would be a huge coup for Marvel Studios.