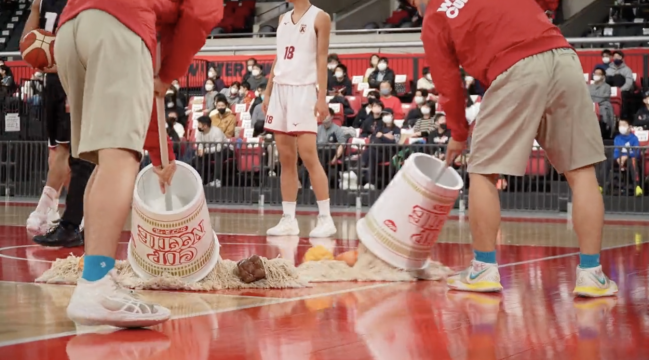 Late last year, the Japanese Basketball Association held the SoftBank Winter Cup in Tokyo. Pitting the best high school teams in the country against one another, it also featured the greatest brand placement of all-time.

In basketball, players land on the floor and their sweat gets on the hardwood. It causes a danger hazard in case someone was to slip and fall, and thus, the sweat is mopped up before that can happen. Pretty common knowledge.

However, in Japan, the mops are next-level.

Nissin Foods, based out of Tokyo, is best known for its production and sale of ‘Cup Noodles,’ more commonly referred to as “cup of noodles.” Also known as instant ramen.

Nissin sponsored the Winter Cup and did so in very unique fashion. The mops for the tournament were made to look like Cup Noodles. They’re awesome.

Anytime a drop of sweat hit the floor, out came the noodle mops, complete with shrimp, egg and, of course, mystery meat.

Here is how the Cup Noodle mops looked in action.

The noodle mop has only been used at the Winter Cup so far. However, if Nissin was smart, it would immediately put in an offer to sponsor the NBA and every single basketball organization in the world.

The mops are such a great conversation starter and, in turn, an incredible marketing strategy. There has never been a greater brand placement.