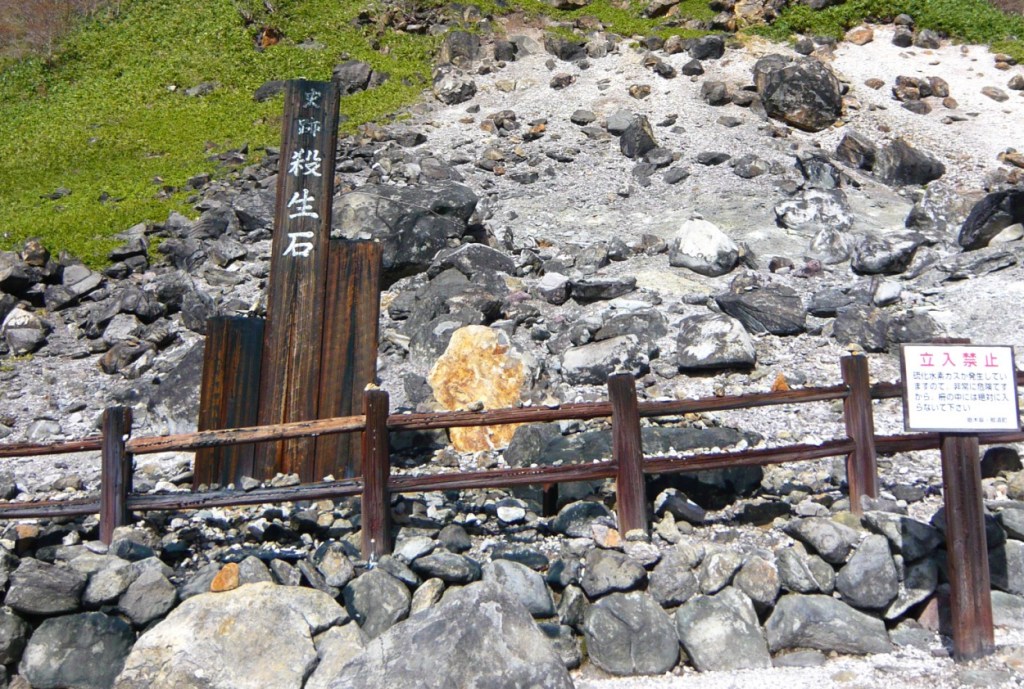 Did anyone have ‘beautiful woman demoness transformed into a nine-tailed fox released after being imprisoned for 1,000 years inside a large boulder’ on their 2022 BINGO card? If you did, you might be able to mark that off your BINGO card because the Sessho-seki aka ‘Killing Stone’ in Japan was recently discovered to have split open and cracked in half.

If you haven’t ever heard of Japan’s Sessho-seki until today, you are not alone. Millions of people are just now learning of the ‘Killing Stone’ which is believed to have housed the transformed body of a powerful demoness for 1,000 years. But the lore surrounding this stone is wild and has put a lot of superstitious people on edge.

The Sessho-seki was discovered to have cracked in half on March 5th. A common working theory on why it cracked in half is ‘natural weathering’ as the stone is ancient. But we’re talking about a stone here that’s believed to have been the prison of a powerful demoness and we’re just supposed to believe that ‘old age’ cracked it in half?!

What is the Sessho-seki aka ‘Killing Stone’?

According to Japanese mythology, the Sessho-seki aka ‘Killing Stone’ is believed to be so powerful that it kills anyone who comes in contact with the stone. Meaning it’s lights out for anyone who touches the stone.

Legend holds that the Killing Stone is actually the transformed corpse of Tamamo-no-Mae. Who’s that exactly? Legend holds that Tamamo-no-Mae appeared to the naked eye as a beautiful woman but was later exposed as being a nine-tailed fox demoness who was working for a powerful Japanese daimyo (feudal lord) who was plotting to overthrow the emperor.

A famous warrior by the name of Miura-no-suke is told to have vanquished the demoness whose body was transformed into the Sessho-seki / Killing Stone as an eternal prison. That is until it just cracked wide open on March 5th…

The Sessho-seki, a famous rock in Nasu, Japan that was said to have imprisoned the evil nine-tailed fox demoness Tamamo-no-Mae, was found broken in half.

After nearly 1,000 years, the demon vixen is presumably once again on the loose. https://t.co/Fz3yRLy4qQ

For reference, here is a photo of what the rock used to look like: pic.twitter.com/nqiplsRB0d

Supposedly, the evil power of the fox demoness Tamamo-no-Mae was so strong that the stone would kill anyone who touched it.

Here are some traditional depictions of the nine-tailed fox demoness Tamamo-no-Mae: pic.twitter.com/0L5qifniHu

And here are some more recent interpretations: pic.twitter.com/Qou97lv71j

Everyone is super chill about the Sessho-seki cracking open, right? Not so much…

You know what? I, for one, welcome our new fluffy tailed doom.

Summoning a demon in 2022. Now I've seen everything.

I think it's right there. pic.twitter.com/pfoCskFitA

Man, imagine of all mythologies and religion Japan was right all along. I'm unironically all for this and want to see where this goes cause I am tired of mundane life and want magical/supernatural stuff to happen.

To that last point, it would be fun if JUST ONCE one of the world’s mythologies or religions was right about something in the modern era. I don’t want any of this ‘doomsday predicted by guy who has been wrong a hundred times.’

I’m looking for a single instance of mythology being real, ever, at any point in the history of civilization and then we can all get excited. Just one!

So let’s all agree to hope there’s actually a nine-tailed Japanese demoness running around as proof that mythology is real?