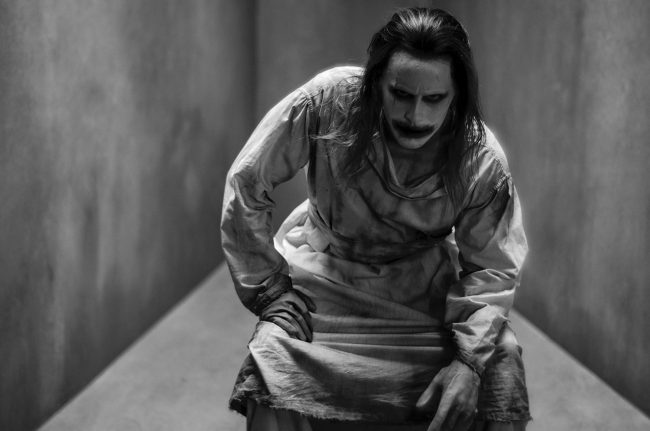 As is the case with most human emotions, I think the great Nicolas Cage could perhaps express what I’m feeling right now better than I ever could, so allow the Academy Award winner to do the talking for me:

Put simply: I am not a Jared Leto fan, and a lot of that pretend hate (as said “hate” has morphed into more of a bit than an actual opinion) comes from what I found to be an overrating of his acting talents and his portrayal of Joker in 2016’s Suicide Squad.

Without relitigating the many shortcomings of Suicide Squad, the long-story-short version is that movie is so egregiously, offensively bad, Leto in particular, that I took it personally and have carried it with me since, as any normal, rational adult would. Again, all for the sake of the running joke, cause who doesn’t love a good running joke? Shit, true story, I’ve been asking my roommate if he wants the sugar at the bottom of my Sour Skittles packs for close to a decade now. All for the sake of the bit.

Despite this five-year resentment, I’ve always understood that the disaster of Leto’s Joker cannot be placed squarely on his shoulders, and therefore have always been open to him getting a second chance, which is something I believe most of us deserve, barring the unforgivable. Lo and behold, in one of the truly remarkable entertainment world twists that I’ve seen during my half-a-decade covering the industry, that shot at redemption came last spring when the infamous “Snyder Cut” of Justice League was greenlit at both Warner Bros. and HBO Max.

The culmination of a years-long online fan movement finally came to fruition, and with it came the whole Justice League gang: Ben Affleck’s (also seeking some redemption of his own) Batman, Gal Gadot’s Wonder Woman, Henry Cavill’s (black-suited) Superman, and Jared Leto’s motherfucking Joker, who not only returned for the film but shot new footage, as well. That footage, as it now seems, will be the Knightmare sequence that was teased in Batman v. Superman: Dawn of Justice, which saw the Dark Knight at war with a deranged Superman on a post-apocalyptic, Darkseid-ravaged Earth.

While HBO Max has largely kept new glimpses of The Snyder Cut close to the chest — the trailers thus far consist of previously shot, sometimes unused footage from years ago — the film’s release is just about a month away, which means it’s about time for the hype train to leave the station. And left the station it has, as Snyder himself has not only confirmed that a new trailer will be dropping on February 14, but Vanity Fair just released the first “official” look at Leto’s retooled Clown Prince of Crime, and I regret to inform you that it looks pretty fucking dope.

The “Damaged” tattoo is gone. Our prayers have been answered. pic.twitter.com/QcKmnlc7OF

Will The Snyder Cut be *great*? Only time will tell. But based on its mere existence, and this much-improved take on the Joker, we can already tell it’ll be far superior to 2017’s Justice League. And that, in and of itself, is a massive win for fans like you and me.