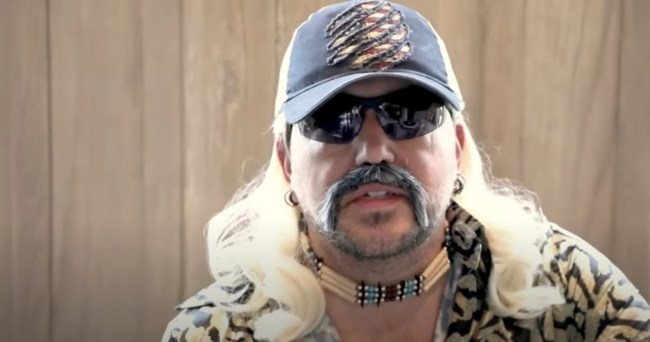 This year has been a whirlwind. It seems like forever ago that we were all locked in our homes with nothing to do but watch Joe Exotic and Carol Baskin go at it on Netflix. Tiger King is surely going to be one of the most popular Halloween costumes this year and Jason Aldean set the bar high with his cover of the hit track ‘I Saw A Tiger.’

Aldean, dressed as Exotic, is seen with his wife Brittany as Joe’s husband and their son Memphis as a tiger frolicking so ferociously through the field. The video is a hysterical representation of a show that took the world by storm and could not have benefited more from a global pandemic. After singing his version of the hit track, Aldean goes on a rant about how 2020 has been all kinds of whack and who is to blame. Obviously, he settles on Carol Baskin. Their daughter Navy rounds out the cast as Baskin at the end, which is a great touch to an already awesome cover.

Exotic is currently serving time in the clink, and his husband is no longer living— he killed himself on the zoo property in 2017. Neither of them may be with us in person, but as the Halloween season continues, the Tiger King’s zoo is rumored to be haunted. It was built on a Native American burial ground and has since seen quite a few dramatic events, as seen in the show, so it doesn’t come as a surprise that a few spirits stuck around. Aldean’s cover fills the void in the meantime.