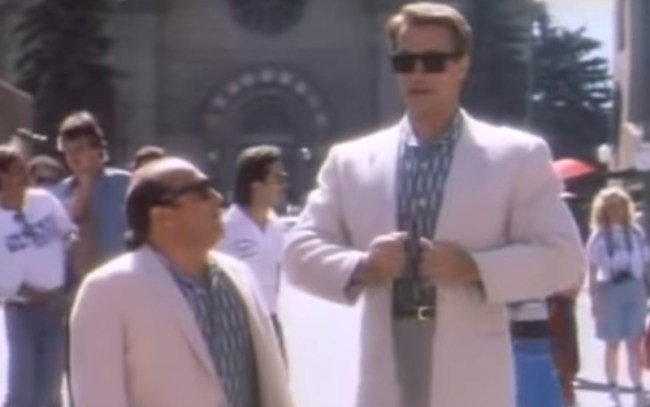 Everything old is new again. Remakes and reboots are so hot right now. There are plans or discussions to make a number of reboots including Pet Sematary, The NeverEnding Story, The Birds, Creature from the Black Lagoon, Scarface, Short Circuit, Flight of the Navigator, Weird Science, Mortal Kombat, Police Academy, Shaft, Sister Act and White Men Can’t Jump, just to name a few. Jason Momoa would like to add Twins to the exhausting list of remakes.

The movie Twins was released on December 9, 1988. The movie with a $15 million budget made $216,614,388 at the worldwide box office. For our younger readers, the movie featured Arnold Schwarzenegger as Julius Benedict and Danny DeVito as Vincent Julius, and they were twins who were separated at birth in the film. Yes, twins, despite looking like two different species.

Jason Momoa was at the Celebrity Fan Fest in San Antonio, Texas, recently and he talked about the idea of remaking Twins with his Game of Thrones co-star Peter Dinklage.

During an Aquaman panel at the fan festival, a person in the audience asked Momoa if he would do a remake of Twins, with Jason reprising Schwarzenegger’s role. Momoa was here for it.

“F*ckin’ tell me where to sign! Absolutely,” Momoa said. “That’d be amazing. I love that movie.”

Momoa and Dinklage would be perfect as twins from a biological experiment.

Momoa, who played Khal Drogo, and Dinklage, who played Tyrion Lannister, seemed to have a blast during filming Game of Thrones and enjoying some drinks together when they weren’t filming GoT.

I FUCKIN LOVE GAME OF THRONES. I am beyond honoured to be apart of this show and am so very proud of all the friends I have met and still continue to keep a tight bond. It’s rare All my aloha to David and Dan for taking a chance on me and in turn getting me to where I am now. Forever DROGO #gameon #mykhaleesi love u @emilia_clarke aloha j

Momoa knows all about being cast as a 1980s action heroes, he has been cast to star in the mountain-climbing Cliffhanger reboot, which starred Sylvester Stallone.

In a world of far too many reboots, this one actually might make some sense.

But Arya Stark and The Hound would also make for a great duo for a reboot or spinoff.