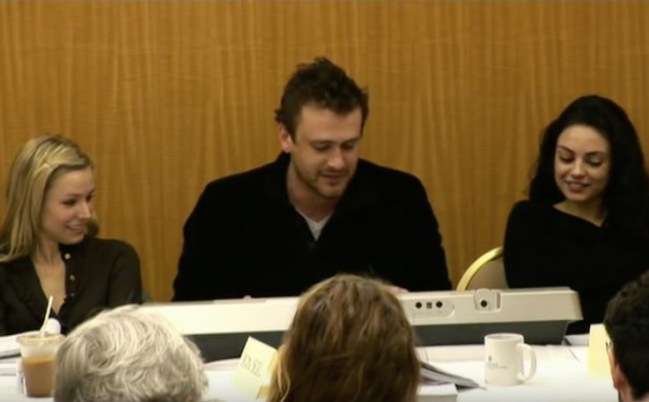 I’ve said this before to pretty much anyone who will listen to me, but I’ll mention it again here, Forgetting Sarah Marshall is probably the most easily re-watchable comedy of the past 15 years. This clip below from the cast’s table reading shows Jason Segel‘s first attempt at singing ‘Dracula’s Lament’ and it’s probably the best clip you’ll watch this month.

I was listening to Kristen Bell recently on Marc Maron’s WTF Podcast and it was kind of amazing to hear how she basically credits Forgetting Sarah Marshall for launching her current career. She was an extremely successful actress before the film (thanks to Veronica Mars) but not in the genre of Comedy. These days she’s starring on The Good Place, one of the hottest comedies on TV, and she credits Forgetting Sarah Marshall with getting her there.

I could spend all day recounting this movie but I’ll save you bros the details because there’s a decent chance it’s on FXX right now, or you can stream it on Netflix. I’ll zero in on the clip below.

This was from the table read before shooting where the main cast gets together and reads through the script to get a sense of what it’s like before getting into costume and the cameras start rolling. This was the first time the cast saw Jason Segel get into Dracula Mode and sing sections of his Dracula musical.

This clip re-surfaced online over the weekend even though it’s a few years old and I felt the need to share it with you bros on this Monday morning after a long holiday weekend because I think many of us are running at half-speed today and could use a comedic pick-me-up.

I think my one and only problem with Forgetting Sarah Marshall is they didn’t ever release a full Dracula musical. They evidently had two songs already written, the one he sang in the bar with Mila Kunis and the finale that he sang at the end of the money as he reconnected with Mila Kunis. They would’ve made a goddamn fortune if they released a full musical with puppets and they could’ve connected it to a sequel movie.