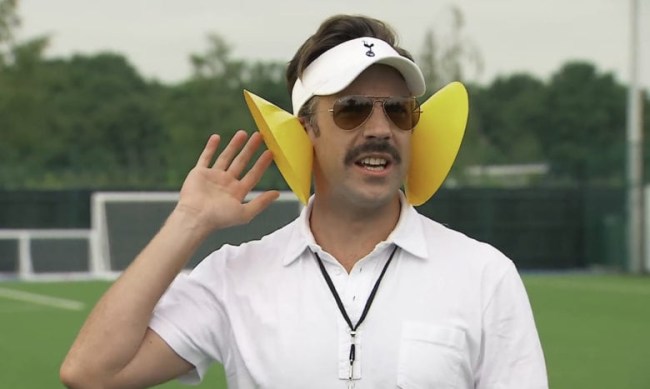 Jason Sudeikis was one of the brightest spots on Saturday Night Live during his time a member of the cast and played some amazing characters, like the judge with Cajun accent with his own show on a public access station in Maine, a broadcaster covering events like the Ladies’ World Cup of Curling alongside a perpetually confused Will Forte on ESPN Classic, and the truly iconic Dancing Guy on What’s Up With That?

He left the show in 2013 but debuted another incredible persona shortly after his departure in the form of Ted Lasso, a football coach from Kansas who’s forced to adjust to a different version of the sport after finding himself tasked with managing Tottenham even though it seems like he may have not even been aware of the existence of soccer prior to his arrival in England.

Sudeikis would also pivot by pursuing a career in Hollywood and went on to produce cinematic classics like We’re The Millers, Colossal, and The Angry Birds Movie. I’m sure there are some people out there who liked those but I was personally much more impressed with his work in the Mumford & Sons music video that featured him and some fellow comedians singing more passionately than anyone in Mumford & Sons ever will.

Last year, we got some unexpected news when it was revealed Sudeikis had teamed up with Scrubs creator Bill Lawrence to create a pilot for a show revolving around the one and only Ted Lasso, and while that combo was enough to pique my interest, I think I’m officially sold based on the trailer that dropped on Tuesday.

It’s easy to make a sketch that’s just a series of gags but the same cannot be said for a television series that’s based on it, so it’ll be interesting to see where Ted’s journey will end up taking him.  It also seems like they’ll be relying on the tried-and-tested “Bumbling American Fish Out Of Water” approach as far as the humor is concerned but I have faith they’ll still be able to keep it fresh.

If you have Apple TV+, you can catch Ted Lasso when it hits the platform on August 14.