Jason Williams On Working In The NBA Again: ‘I’m Bored To Death… I’d Love To Have Something To Do” 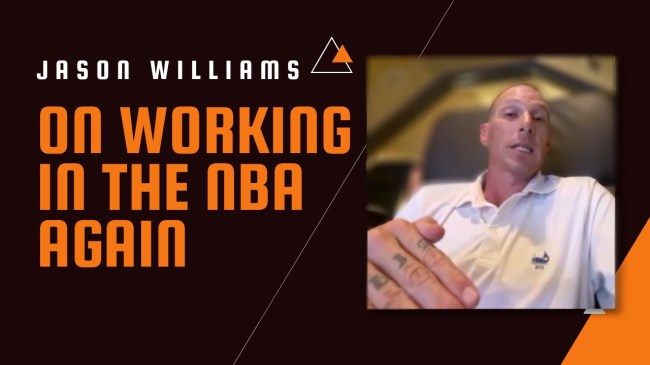 After 10 years on five different teams, Jason Williams officially retired from the NBA for the second time in 2011.

Now, over a decade later, it sounds like The Greatest Show On Court wouldn’t mind returning to the NBA with a retirement gig.

Williams, aka White Chocolate, is currently featured in a new POWERADE commercial running through March Madness. Maybe you caught it during the NCAA Tournament. It’s called “Pause is Power”, celebrating how pausing to refuel, rethink and recharge as a sign of power, not a weakness. Williams appears with his teammate Chris Webber and Olympic gymnast Simone Biles.

I chatted with Williams about the “Pause is Power” campaign and how he’s encouraging student-athletes to enter the “Press Pause Contest” for a chance to win $10,000 and allow them to rebalance and recharge themselves to come back stronger next season. Details here.

In 2020, during the airing of ESPN’s The Last Dance docuseries about Michael Jordan and the Chicago Bulls dynasty, Williams tweeted interest in returning to the NBA for a front-office job.

Like Allen Iverson to the 76ers and Kobe Bryant to the Lakers, Williams’ hoops legacy is firmly etched to the Sacramento Kings. He’s arguably one of the team’s most popular players of all time, beloved by a generation for being fast and electric on the hardwood.

Jason Williams On Working In The NBA Again

I asked Jason Williams about his interest in returning to the NBA in a role, perhaps for Sacramento. He waxed glowingly on the idea of doing something in the league again after his decade-plus break.

He said that not only is he ready, he’s “bored to death” and would “love to have something to do.”

Sounds like he’s just waiting for a phone call from someone in the front office. Or any team, for that matter.

“That’s music to my ears,” Williams offers. “Anything to help Sacramento out the way they’ve helped me out… I’d love to get in the organization somehow.

I just love the game so much. I feel like these younger kids that are coming into the league need some advice from veterans that have worn their shoes before. If that happens to be in Sacramento, that’d be great.

I’m bored to death with my life. I’d love to have something to do. I play golf a lot – golf’s hard, it’s frustrating sometimes. But like you said, I’d love to be a part of some organization and if it happened to be Sacramento, that’d be awesome.”

Since Williams is playing a lot of golf in retirement, I asked him about the NBA alumni in his golf core…

“No retired guys live here in Orlando where I live, so I have to travel to set up different games with guys. You know, Chris Quinn, an assistant coach with the Heat, he’ll play some with him. Jason Kapono, Michael Doleac – these guys are pretty good golfers, I try not to let them beat me too much.”

Watch the full interview below on the BroBible YouTube Channel: