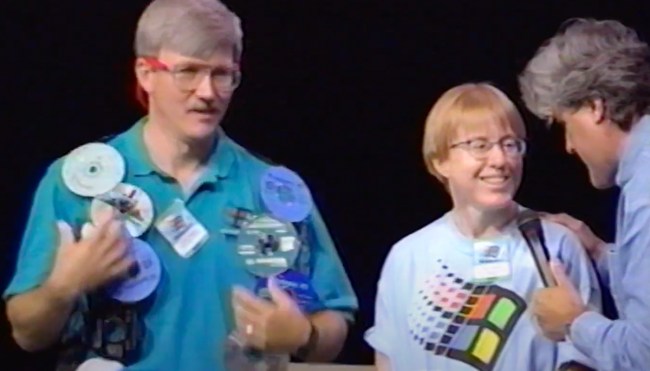 In the mid-1990s, Microsoft ushered in a new age of technology with the release of Windows 95, which was a fairly revolutionary operating system that made the world of personal computing infinitely more accessible to your typical user.

While it had its fair share of critics (including the Apple Fanboys who were more than happy to point out Steve Jobs had beaten Bill Gates to the punch on a number of features), it was nonetheless a resounding success and one that cemented Microsoft as the biggest player in the computing game.

Prior to the release of Windows 95, the company pulled out all the stops to drum up excitement—and it’s safe to say Steve Ballmer was absolutely amped based on an iconic video of one of the events that preceded its debut.

I broke down the film pic.twitter.com/8qU9Ggr2QC

Matthew Perry and Jennifer Aniston were both tapped for a “cyber sitcom” that served as a guide for new users, but they weren’t the only big names to get a sizeable bag from Microsoft for their role in promoting the platform.

Microsoft also had Jay Leno serve as the master of ceremonies for an internal presentation for employees on the company’s campus, and while some clips of that event had managed to surface over the years, it seemed the full video was lost to history.

However, that all changed earlier this week when someone uploaded the entire 92-minute affair to YouTube, and it has everything: a guy wearing a vest made of CD-ROMs, Bill Gates playing virtual pinball, and Leno rattling off an endless stream of the groan-inducing jokes that made him the king of late night in the 1990s.