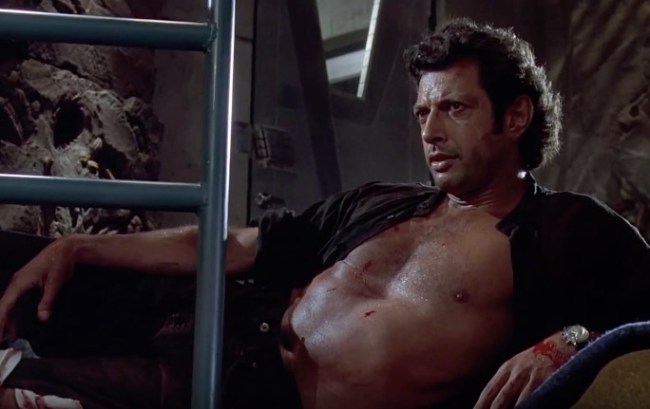 Can you believe that it’s been 25 years since Jurassic Park first hit theaters? I vividly remember seeing that film at the Sarasota Square Movie Theater here in Sarasota, Florida and it’s been so long that theater doesn’t even exist anymore, it’s been converted into storage space for a Costco.

The film hit theaters in June 1992 with an estimated budget of $63 million and went on to earn more than $1.029 billion at the box office worldwide. A complete global phenomenon. To celebrate the 25th anniversary of Jurassic Park, NOW TV in London unleashed this shirtless 25-foot statue of Jeff Goldblum‘s character Malcolm. They’ve erected the statue just near London’s Tower Bridge, one of the busiest tourist locations in all of London.

Londoners, tourists, and fans of Jurassic Park simply cannot get enough of the shirtless Jeff Goldblum state as it’s blown up on social media:

Something magical is about to happen 🤔😍 pic.twitter.com/BtpHHXbnXS

To celebrate the 25th anniversary of JURASSIC PARK's premiere in the U.K., streaming service @NOWTV unveiled a statue of Jeff Goldblum in London's Potters Field. pic.twitter.com/hTFNKURMZM

25ft Jeff Goldblum statue pops up in London to celebrate the 25th anniversary of Jurassic Park, which was June 11th, a month ago. Also none of the movie was filmed in London nor is Jeff Goldblum a native of the English capital. So let's just bask in its nonsensical glory. pic.twitter.com/TKQKozleMn

There's a giant Jeff Goldblum statue down by Tower Bridge.
It's a bit far-fetched but you should stick with it for the nips alone… pic.twitter.com/K1UEXfRo4e

"25ft half naked Jeff Goldblum appears in front of Tower Bridge" – Londoners, I think we all know what we need to do… pic.twitter.com/RAMgmUTyi8

When they build a 20ft tall Jeff Goldblum statue down the road, there's only one thing to do: pic.twitter.com/HqmYlb8t4i

Omg an effigy of my fav person ever @nowtv #JurassicJeff @jeffgoldblum pic.twitter.com/dWBrQBG6lk

There are few places better to be than London in the Summer. The warmer temperatures really bring out a special mood in Londoners, and one that you don’t find in too many other major cities. London’s soooooo far north. The sunrise is at like 5am with 9pm sunsets in the Summer. They kick back, relax, take the shirt down a few buttons like Jeff Goldblum, and enjoy the little things in life. We should all be so lucky.