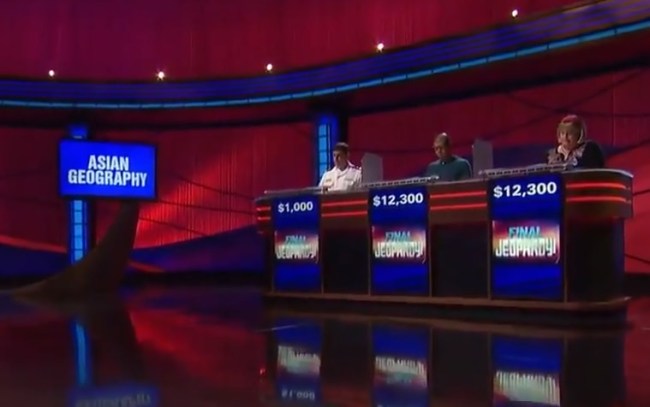 Jeopardy had a nice run of compelling shows with the incredible winning streak by Austin Rogers over the past few weeks. On Tuesday night’s Jeopardy, the entertaining game show continued with a crazy finish that has only happened three other times in the show’s history.

Naval officer Manny Abell was hoping to continue his own two-day winning streak on Jeopardy, but it looked pretty grim for him going into Final Jeopardy. Manny had $1,000 and his two competitors both had $12,300. The category was “Asian Geography,” and the clue was: “It’s the only country that borders both the Caspian Sea and the Persian Gulf.”

Manny guessed “Iran,” but he was incorrect and lost $999 of his $1,000. Carlos bet all his $12,300 on “Azerbaijan.” Fran bet the entire farm on “Tibet.” Both answers were incorrect and since they both went all in, they were left with $0. These unwise moves handed the victory to Manny, who finished with $1. This is basic Jeopardy strategy here folks, you don’t leave yourself with ZERO dollars.

This odd kind of victory by winning with $1 has only happened three other times in the history of the TV game show. On January 19, 1993, another military man, Air Force Lt. Col. Darryl Scott won with only a buck. Benjamin Salisbury also claimed victory with the smallest of margins in 1997, and Brandi Chastain did the same in 2001. Manny started with $42,798 going into Tuesday’s game show and leaves victorious with a grand total of $42,799.