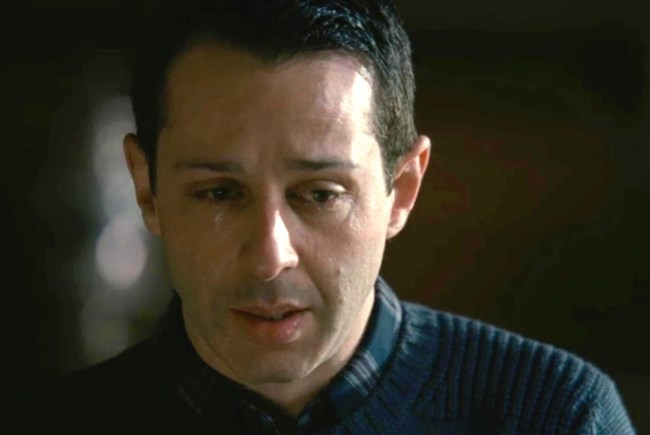 You most likely know Jeremy Strong as the guy who plays one of the many assholes on the asshole-centric television show Succession. If you’re not familiar with the series, the logline is that it’s about a bunch of rich and powerful white people fighting for power, which should help you narrow it down. It’s listed as both a drama and a comedy but you will likely not find yourself regularly falling on the floor and laughing while watching it.

Succession wrapped up its second season last fall but Strong as been keeping busy, as he’s starring alongside Sacha Baron Cohen and Joseph Gordon-Levitt in the upcoming Aaron Sorkin movie The Trial of The Chicago 7. The film follows the Vietnam War protesters who were assaulted by police and National Guard during the 1968 Democratic Convention, where they found themselves on the receiving end of tear gas, batons, and shows of excessive force—you know, the kind of scene you couldn’t even fathom seeing in America in 2020.

We’ve already established that Strong is an actor but that’s actually not entirely accurate—he’s a method actor, which anyone familiar with the philosophy knows is a different beast entirely. There are rumors that he demands to be referred to as “Kendall” while on the set of Succession, and while I can’t confirm that, I can confirm he’s committed to his craft based on a story Sorkin recently shared with Vanity Fair.

The director didn’t reveal if the man he cast to play Jerry Rubin was referred to as such on his set but he did recall a scene where the protestors are subjected to tear gas that required Strong to mimic its unenjoyable side effects. Anyone familiar with Sorkin’s dialogue knows realism isn’t a huge priority for him but the same cannot be said for Strong, as the director recalled what transpired prior to the first take, saying, “Jeremy begged me to spray him with real tear gas.”

“Begged.” Not “asked.” Not “requested.” Not even “urged.” Begged. Sadly, his request was not granted.

Strong comes from a long line of actors who have been known to go to great lengths to truly embody and become the character they are playing. Daniel Day-Lewis is probably the most notable example when it comes to the results method acting can produce and the fact that it tends to turn you into a fucking prick who’s a nightmare to work with, as evidence in the Netflix documentary about Jim Carrey’s behavior while playing Andy Kaufman in Man on the Moon. I don’t think either of them has been teargassed for a role, however, so I can imagine Strong is a little pissed he didn’t get those bragging rights.

I know movie release dates don’t mean anything anymore but The Trial of The Chicago 7 is set to come out on September 25th, which means I have two months to convince a high-profile reviewer to say he was too distracted by Strong’s unconvincing reaction to an irritant to enjoy the rest of the film.