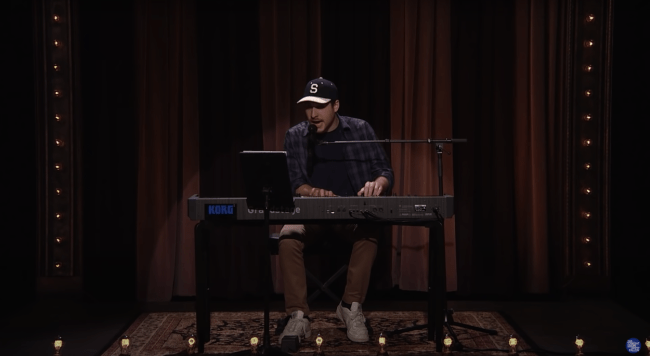 If Jimmy Fallon didn’t know about the electric organ before, he knows now. During a segment on Wednesday’s edition of ‘The Tonight Show,’ an audience member let him know what is good before performing a hilarious song about an off-brand rapid test.

The segment was simple, and yet very stressful.

Two audience members, who just so happened to be musically-inclined, were selected from the crowd. They were given two separate topics and tasked with writing and performing a song about their respective topic in under an hour.

The two people chosen were Kimberly DeNiro from Massachusetts and Ryder Chasin, the pride of Westport, Connecticut.

Kimberly went first. She was asked to sing a song titled ‘I’m Scared Of My Roomba’ (which was objectively difficult) and did a great job.

Ryder went second and blew her out of the water. It was a boat race.

The prestigious Staples High School graduate was given the song title ‘I Bought An Off-Brand Rapid Test.’ He nailed it.

However, the funniest exchange of the entire segment might have been before Ryder performed.

Fallon asked: “You will be playing the piano as well?”

“The electric organ,” Ryder corrected him.

“It’s cool,” Ryder replied as the two tried not to crack up.

“Thank you for correcting me,” Fallon said, unable to keep a smile off of his face.

When it was time for Ryder to perform, he knocked it out of the park. His song about purchasing an off-brand rapid test is laugh-out-loud funny.

Without spoiling the ditty, keep listen for the line “guess I’m staying home alone-a” that goes so under-appreciated in the audience.

Ryder rightfully won the song-writing contest, but both he and Kimberly went home with $1,000. More importantly, they each went home with a The Tonight Show notebook to write more songs.

Hopefully Ryder keeps writing bangers, because the dude has talent. After a quick google search — because there may only be one Ryder Chasin in the entire world — you can find his Instagram profile HERE and YouTube channel HERE.

Chasin’s going somewhere… get on board with the laughs now so you can say “I told ya so” down the road!