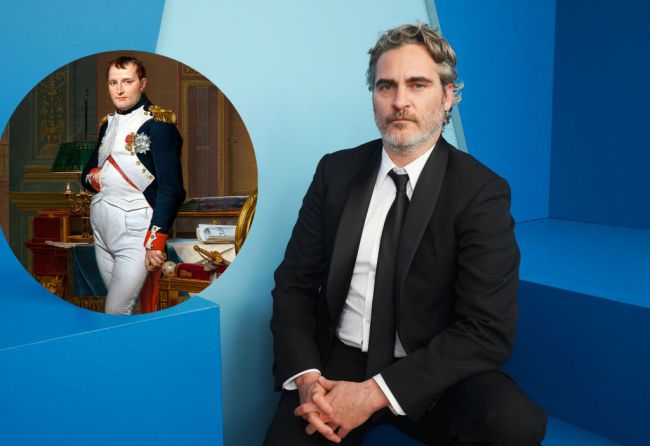 Joaquin Phoenix, the man who made a name for himself by playing a historically significant psycho, Commodus in Gladiator, is once again returning to the type of role that first turned him into a star 20 years ago, as reports indicate the 45-year-old has signed on to play Napoleon Bonaparte in Ridley Scott’s upcoming historical epic Kitbag. This will mark the pair’s first collaboration since 2000’s Gladiator, which took home the Academy Award for Best Picture.

According to Deadline, Kitbag — whose title comes from the saying ‘there is a general’s staff hidden in every soldier’s kitbag'” — is reported to be “an original and personal look at Napoleon’s origins and his swift, ruthless climb to emperor, viewed through the prism of his addictive and often volatile relationship with his wife and one true love, Josephine.”

“The intention of the film is to capture Napoleon’s famous battles, relentless ambition and astounding strategic mind as an extraordinary military leader and war visionary,” Deadline reports.

Despite now being 82-years-old, Scott remains as prolific as any major director working today. After just finishing production on The Last Duel — which is stars Ben Affleck, Matt Damon, and Adam Driver — Scott is set to begin shooting Gucci, the Lady Gaga-starring Gucci, which tells the story of Patrizia Reggiani’s plot to assassinate Maurizio Gucci. In addition to Gaga, Gucci features Robert De Niro, Al Pacino, Adam Driver, and Jared Leto. As Deadline states, the production of Kitbag will begin once Gucci is completed.

As for Phoenix — who was last seen winning an Academy Award for Joker and will next appear in Mike Mills’ C’mon C’mon — he’s arguably the perfect choice to play the notoriously diminutive yet ruthless and brilliant Napoleon, who an infamous legendary commander during the French Revolution.