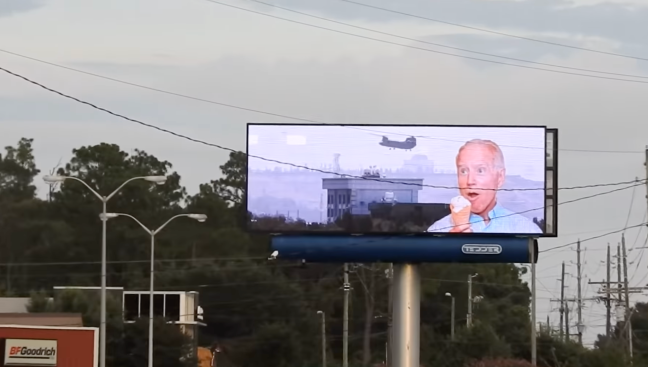 Folks in Wilmington, North Carolina were greeted by some new images on a digital billboard, and they weren’t advertisements for a new restaurant in town or some local law firm. Instead, Joe Biden memes popped up on the screen.

One of the memes showed President Biden chowing down on an ice cream cone with an image of a United States Chinook evacuating embassy in Afghanistan in the background. The other is the well-known image of Biden peaking through window blinds Michael Scott style.

For those that may think the billboard memes are fake, fact-checkers drove out to the billboard to make sure it was real. Video confirms that the billboard hack was real and the memes were being shown at Eastwood and Racine in Wilmington.

Forget Instagram memes, even tho they likely get way more eyes on them compared to a traditional billboard, but memes on billboards should be a thing.

People are already posting meme after meme all over Facebook and Instagram, let’s take the memes to a bigger screen. Whether it be political jokes like this or something entirely random, let’s throw it on a billboard. Just keep it clean, no worse than PG-13.

‘Memeboard’ has a nice ring to it. You can’t take that name, it’s written in stone here, therefore I own it. I took a media law class in grad school, I know what I’m talking about here.