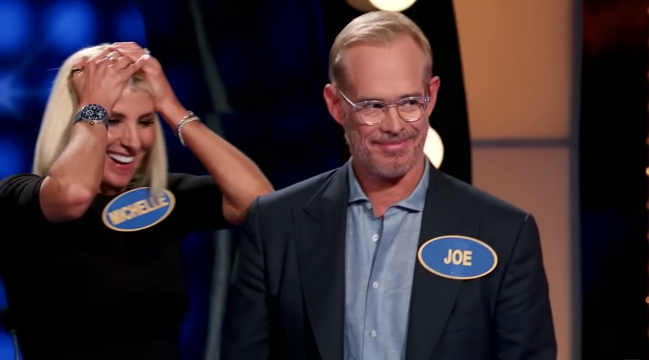 Family dinner in the Buck household is going to be rather contentious over the next few weeks. If Joe Buck is even allowed at the table, that is.

Earlier this week, Buck was joined by his sister, his wife and his two daughters to play ‘Celebrity Family Feud.’ The Buck family was facing off against actor Oliver Hudson and his family.

After going back-and-forth the entire game, the winner was to be determined by the final prompt— or question or category or whatever you want to call it.

“Name a woman who is smarter than you”

Naturally, with this prompt, the top three answers were:

With one response remaining on the board, all that the Buck family had to do was get it right. Should that be the case, they would win the game.

The Buck family huddles for a moment before Joe broke the huddle and gave a sarcastic quip congratulating the Hudson family for the win. Little did he know, that prophecy would come true and it would be all his fault.

Immediately after he gave his response, his wife, sister and daughters looked baffled. That was not the answer they had discussed, but Joe remained confident.

He was wrong. “Best Friend” was not the answer.

Buck’s family quickly threw Joe under the bus and said that they had discussed the answer “Boss.” Joe went rogue and was wrong.

The correct answer was, well, “My Boss.” His family was furious and the whole thing couldn’t have been any funnier.

Oof. Tough day to be Joe.