Joe Exotic Writes Letter Claiming He Will Be Dead Inside 3 Months, Begs Cardi B And Kim Kardashian For Help 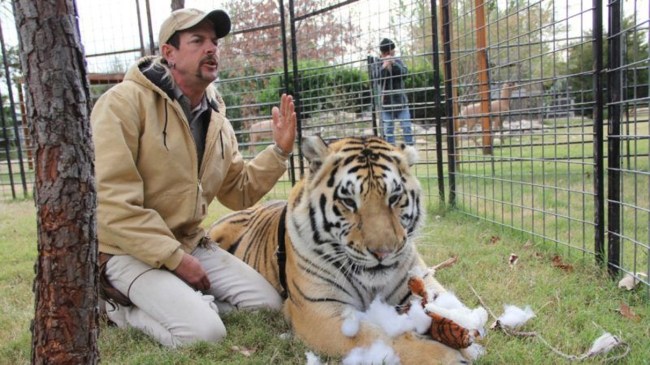 The main character in Tiger King: Murder, Mayhem and Madness, Joe Exotic, might not be with us much longer. At least that is what he is telling all of his fans.

In a three-page letter sent to his “supporters, fans, loves ones,” Exotic claims that if someone with some troke, like President Donald Trump (or Cardi B or Kim Kardashian), doesn’t intervene soon, it will be curatins for the 57-year-old former zookeeper.

Exotic claims in the letter obtained by TMZ that his “soul is dead” and that he has been “locked down 24/7 with no phone, email, or commissary.” Kind of like he’s… in prison.

“I don’t even know if I’m married anymore, seems everyone is so busy making money and being famous,” wrote Exotic. “I don’t get even a letter from Dillon [Passage], everyone sends pictures of him having fun and all but as a person screaming for help I am asking you to stop.”

Exotic also stated in the letter that he requires blood infusions “every four weeks” to treat his CVID (not COVID-19) condition he has “not had one since end of January.”

“I’m loosing weight, sores wont heal, I’ll be dead in 2-3 months, it’s like I have been sent to death row, they stopped all of my medication expect one, this place is hell on earth [sic],” he wrote.

Exotic also makes some rather questionable references to George Floyd and the protests and how he too was the victim of “bad cops and crooked justice.”

“What did I ever do but take people in, give them a home, a job and a paycheck and when that wasn’t enough I went out and done it for people all over of every color, age and sex, and look now, we are all riding the white horse of fame at my expense again,” Exotic added.

Well, there were the 19 crimes he was convicted of committing, but yeah, what did he ever do?

“Hear my scream for help,” he closed the letter.