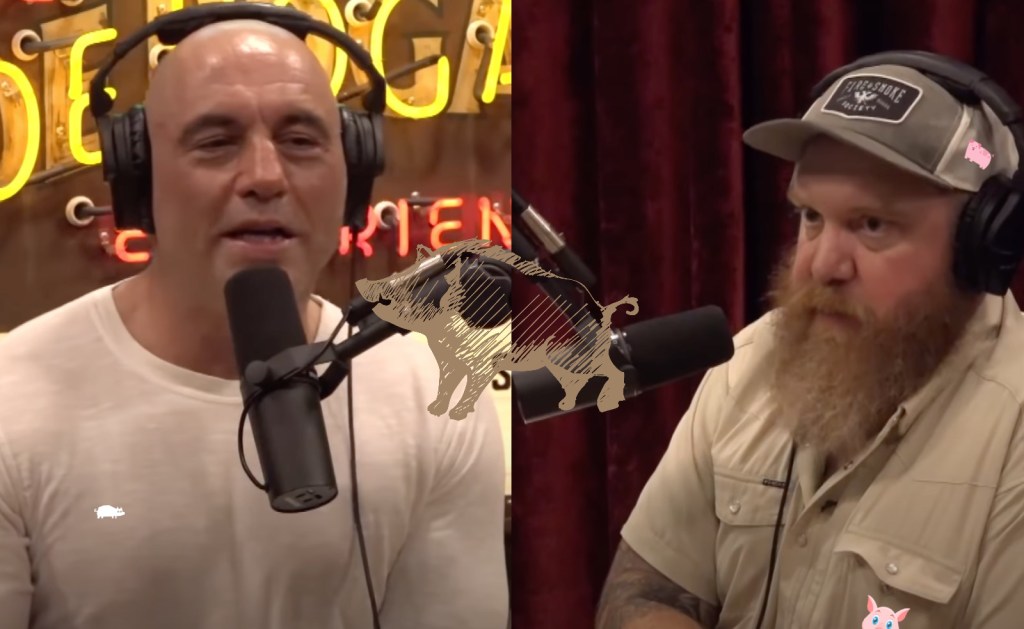 I’ve been trying to make more of an effort to watch at least one Joe Rogan clip a week because I know I’ll enjoy them but never find the time. This week’s clip is California transplant Joe Rogan chatting with Texas chef and butcher Jesse Griffiths about feral hogs.

There is a very serious ecological crisis in Texas caused by feral hogs and it continues to unfold with no end in sight. Feral hogs have no ‘breeding season’ and reproduce year-round. The babies look cute, sure, but they destroy crops and multiply rapidly.

In Texas alone, there are an estimated 1.5 to 3 million feral pigs and hogs. Nobody knows the exact number. But there are only 970K residents in Austin. So there are more wild hogs and pigs in the Lonestar State than there are people living in Austin. We’re talking so many feral pigs that people hunt (shoot) them from helicopters and just leave them out there because it’s all about population control.

Here’s Joe Rogan and Jesse Griffiths who’s an expert on this topic discussing the current feral hog disaster in Texas, how it started, and what can be done about it. Side note: if you were ever wondering what Paul Giamatti would look like with a massive beard, now you know.

Now that you’re an expert on the Texas Feral Pig Crisis we can pivot the conversation a little.

I don’t think we could discuss feral pigs and hogs without mentioning one of the funniest tweets in the history of Twitter. This took place during one of the thousands of gun debates on Twitter. Some guy swooped in with this question and claimed he needed his assault rifle to handle pigs.

To date, I’ve never heard from a single living/breathing person to whom that applies to but I’m sure there’s at least a handful out there in Texas.

I guess it’s worth mentioning that despite having never gone hunting for feral hogs myself I’m still very much in favor of it as a means of population control. They ravage the natural landscape and are an invasive species. Hunting feral pigs and hogs is a pro-environment measure and that’s my two cents.