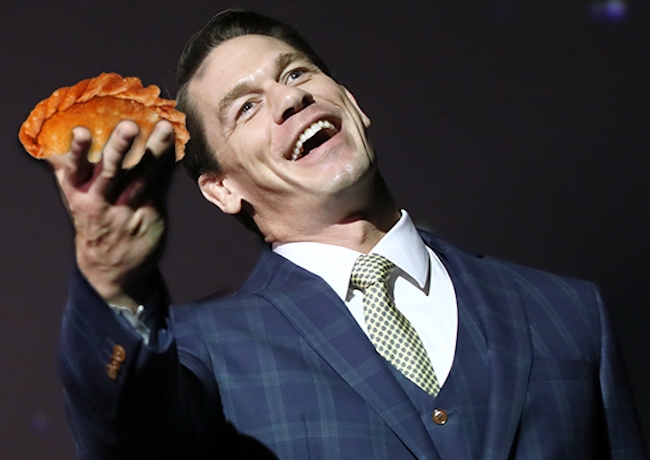 I never really noticed how rare it is to see an actor actually eat onscreen until I read an article about Brad Pitt going out of his way to do exactly that in many of the films he’s appeared in as a way to make the audience subconsciously relate to his characters (in addition to just having something to help keep himself busy while filming scenes).

There are certainly other exceptions—for example, a lot of the meals in The Sopranos were sourced from authentic Italian restaurants to make sure the cast actually got to enjoy the many dishes they downed over the course of the series—but when you consider you run the risk of pushing your stomach to the limit while downing food that tends to become less and less palatable with each passing take, a lot of actors will actively avoid devouring anything while in front of the camera.

However, John Cena is not one of those people, as Screen Rant reports he recently appeared on a panel where he discussed his time on the set of James Gunn’s The Suicide Squad—including the day when he ate a truly staggering number of empanadas while filming a scene.

The wrestler-turned-actor will play Peacemaker in the reboot of the fairly underwhelming adaptation that came out in 2016 and apparently decided his character seems like the kind of guy who would down one of the meat-filled pastries in a single bite. However, he failed to anticipate the scene in question would take 31 takes to complete, and by the time shooting wrapped, he’d housed the same number of empanadas (he said he probably would’ve puked all over the set if he’d been forced to eat a 32nd one).

Say what you will about Cena’s acting skills but you’ve got to respect anyone with that kind of commitment.