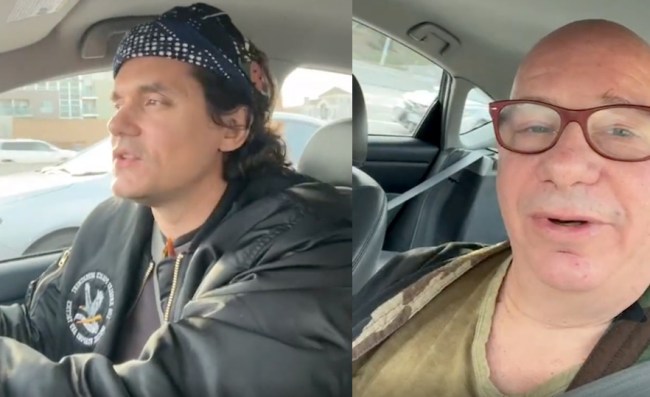 John Mayer and comedian Jeff Ross teamed up to do their late friend Bob Saget one last solid: Picking up his Toyota Prius at Los Angeles International airport.

The two friends, both long-time friends of the late actor and comedian, headed to an airport parking garage to retrieve their friend’s car. Saget had parked at the airport before his flight to Florida for a string of comedy shows.

The Full House star passed away on January 9, shortly after a show in Jacksonville.

While returning the Prius to Saget’s wife, Kelly Rizzo, Mayer and Ross went live on Instagram in heavy LA traffic on the 405 Freeway. They dubbed the video “Rolling With Saget”.

Fighting back tears in the passenger seat while Ross drove, Mayer delivered a heartfelt tribute to his friend, beloved by so many. Mayer and Saget were very close friends for years, with Mayer giving a speech at Saget’s wedding to Rizzo a few years. Saget had previously joked about the wedding speech on the Chicks In the Office podcast, noting that their friendship began he asked the musician to do a stand-up performance for a Scleroderma benefit show.

“I have to say, disclaimer, we are just a couple of stars in the galaxy of Bob Saget’s loved ones,” Mayer explains in the tribute. “This is one story out of a gigantic tapestry of stories from people. … This guy replicated direct-connect love with more people than I ever would be able to.”

“The thing that just keeps coming up when people say they’re sorry is just, ‘I loved that guy.’ It’s like music to be able to say that. ‘I loved that guy.’ … He had every excuse under the sun to be cynical, to be upset, to be distrusting. … But he laughed and he spread joy and his protest against the cruelty of these things was that he was going to smile, and spread love, and be childlike, and be innocent and be loving.”

“You know how effusive you have to be in your love for everyone in your life, for each and every person he loved to be told by another, ‘He loved you so much’? Everyone is held into place by Bob’s insistence on telling everyone how much he loved everyone.”

“I’ve never known a human being on this Earth who could give that much love, individually and completely, to that many people in a way that made each person feel like he was a main character in their life and they were a main character in his life.”

Ross added that Saget was the kind of guy who was always there for everyone – a person who treated everyone he met like family. He also, “ended the most benign conversations with ‘I love you.'”

“[He] really did take care of everybody … If you need a doctor, if you need a lawyer, if you need a pastrami sandwich at 3 in the morning because some girl just broke your heart, Bob was that guy. He loved making people happy. It didn’t matter who you were, your status … he somehow took his TV family and made them his real family, which is unheard of.”

“There’s going to be something missing for a long time.” Ross added.

At another point in the Instagram live, below, Mayer noted that his late friend was the one who would have helped him deal with such grief. Saget’s sister, Gay Saget, passed away of scleroderma in 1994. Saget was a fierce champion and fundraiser for the Scleroderma Research Foundation in her honor, hosting an event called “Cool Comedy Hot Cuisine.”

“Bob had every excuse under the sun to be cynical, to be upset, to be distrusting of fate. His joy and his innocence in the face of a life that really took from him in places was his middle finger to it all. … He had every reason to be the guy in the back of the bar, bitter… Instead, his protest against the cruelty of these things was that he was going to smile, and spread love, and be childlike, and be innocent, and be loving, even after what he knew could happen in this world.”

Mayer ribbed that the parking garage attendant wasn’t going to let them leave without paying. Ross said he planned on keeping the receipt as a part of remembering Bob, similar to how he held onto his grandfather’s union card.

On her Instagram, Saget’s widow, Kelly Rizzo, shared the video, along with a sincere thank you to the two.

“No words for how much this meant to me. These 2 men have been holding me up and taking care of me (along with many other incredible people who loved my husband more than anything). But these two, driving our little Prius that Bob left at the airport, home, was such a solid. And I’m happy it gave them some time to ruminate and share their love of Bob with all who watched. The Prius is now home.”

Watch the full tribute below via Mayer’s Instagram. It’s such a wonderful, loving tribute from two men who called him a friend, sharing their grief from the loss of a man they cherished dearly.

It hits so hard in the feels; funny and raw, an emotional reminder of just how much of an impact Saget had on those in his orbit, both on-screen and off.

In the comments, Tank.Sinatra sums it up perfectly:

“I didn’t know Bob, but I can tell what kind of guy he was by listening to his friends.”