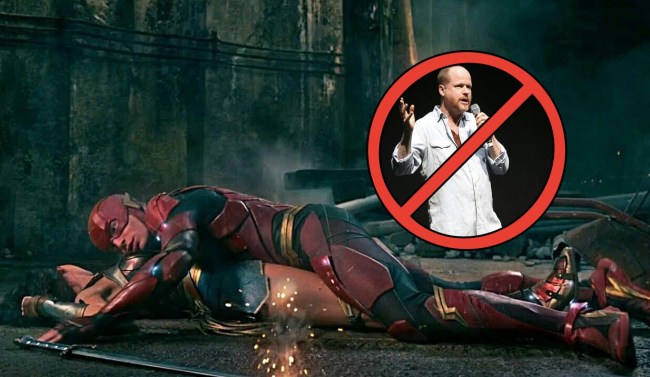 While Zack Snyder has never been confused for being *everyone’s* cup of tea, you’d be hard-pressed to find a respectable movie person — whether they be a studio executive, a film critic, or the average fan — who would deem Whedon’s cut to be the better of the two. How Warner Bros. ever screened Whedon’s cut and decided to release it to the public is beyond me.

Now that fans are finally able to consume the epic they should’ve gotten four years ago, Whedon’s name is being absolutely dragged through the mud on Twitter as everyone essentially wonders the same thing: what in the actual hell was Whedon doing, thinking, and trying to create?

Joss Whedon and Geoff Johns needs to be put in jail for turning this wholesome scene into whatever tf that is.

Joss Whedon really looked at this and thought "Nope, cut that sh*t out".

It’s been only 25 mins and this shit 100x better than Joss Whedon’s Justice League #SnyderCut pic.twitter.com/mUf3TDlUZx

Except for @joss hope your morning is a total bummer

loving the joss whedon slander on my tl this morning #SnyderCut pic.twitter.com/2okUjwolob

All of Twitter to Joss Whedon after we all finished the #SnyderCut pic.twitter.com/mCZVN5GfRI

joss whedon logging onto twitter and seeing everyone shitting on his version of the justice league pic.twitter.com/rojjH0phL7

What Joss Whedon had Cyborg doing in the theatrical cut pic.twitter.com/VwiBnXNbSj

Side note, had to pause and say this.

GEOFF JOHNS AND JOSS WHEDON DESERVE THE PITS OF HELL FOR WHAT THEY DID TO CYBORG AND RAY FISHER. Holy fucking shit

Me and the boys just buried Joss Whedon pic.twitter.com/IUmU5rgtOs

It is legitimately flabbergasting that not only did Whedon essentially reshoot the entire film but that the reshoots he produced were so deeply awful that you’d be forgiven for thinking you were watching a CW Series (no offense to the Arrowverse, of course).

From Cyborg and Flash’s arcs, to the over-sexualization of Diana — Flash landing on top of her, Aquaman telling her how hot she is when he sat on her Lasso of Truth. From the “thirsty” scene between Martha and Lois, to the “save one person” speech from Batman. From the entire color aesthetic and the CGI, to the humor and the drama: literally everything Whedon put forth was inferior and the internet is rightfully letting him know it.

Zack Snyder’s Justice League is (finally) now streaming on HBO Max. We covered the film in-depth over on the Post-Credit Podcast, so make sure to give that episode a listen if you enjoyed The Snyder Cut as much as we did. And don’t worry, there’s plenty of Joss Whedon slander in it.