NOT A DRILL: ‘Justified’ Sequel In The Works, Timothy Olyphant In Talks To Return 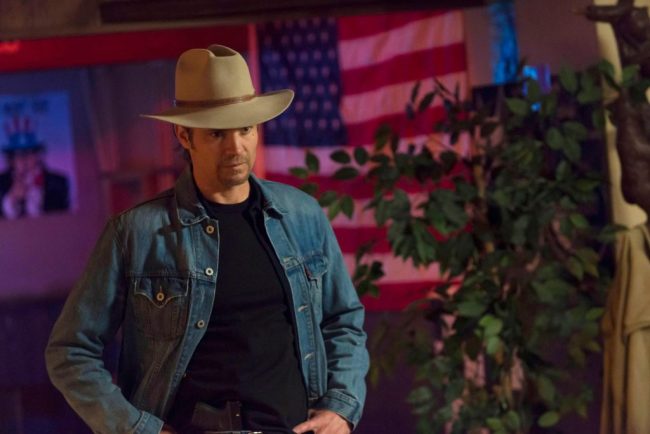 One of the best series of the 2010s is on the verge of a reboot, as reports indicate that a follow-up to Justified is in the works with Timothy Olyphant reportedly in talks to return as Deputy U.S. Marshal Raylan Givens.

The team behind “Justified” is reuniting to develop an FX series based on the Elmore Leonard novel “City Primeval: High Noon in Detroit,” with Timothy Olyphant potentially returning as Raylan Givens.

According to sources, as the project is in the very early stages, nothing is set in stone as of yet, meaning Olyphant could star in the series or appear in a smaller role, but no deal has yet been made. [via Variety]

Justified, which first premiered on FX in 2010, aired for season seasons on the network, concluding in 2015. The critically-acclaimed series nabbed eight Emmy nominations, including a Best Actor nom for Olyphant in 2011.

Should Olyphant hop back into the cowboy hat of Raylan Givens, it will mark the second time in recent years that he’s returned to an iconic sheriff character in recent years, as he reprised his role of Seth Bullock in the Deadwood film. There’s also his appearance in The Mandalorian, where he popped up as Cobb Vanth in the first episode of season two, titled “Chapter 9: The Marshal”.

Between you and me, I’ve actually never seen Justified. Trust me I’ve also wanted to start it — Timothy Olyphant has been my GUY ever since The Girl Next Door — but given the insane rate at which movies and television are released these days, it’s becoming increasingly difficult to catch up on old series. That said, perhaps I could stop rewatching Breaking Bad and The Sopranos once a year.

Started Yellowstone — the Father Energy of this show is extraordinary.

Across the country, at all hours of the day, there is a man polishing off a beer and dozing off in his recliner as Yellowstone plays in the background.

Kevin Costner is essentially the Pope of Dads.