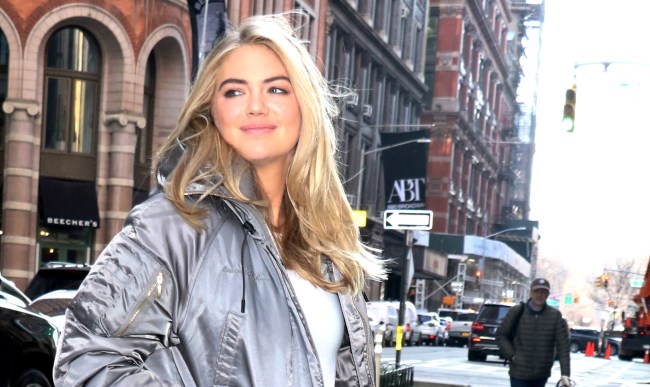 While hosting her Strong4Me Fitness class at theSkimm’s headquarters in New York on Wednesday, Sports Illustrated swimsuit model Kate Upton was confronted by a group of angry animal rights activists who decided that was the best time to protest her partnership with clothing company Canada Goose.

Back on November 13th, World Kindness Day, Upton wrote on social media that she had partnered up with the company and Polar Bears International “to help raise awareness and ensure a future for polar bears.”

“Thank you @canadagoose & @polarbearsinternational for you efforts to make this world a better place,” Upton wrote.

“This is really hypocritical considering you’re condoning the abuse of coyotes and geese FOR NO REASON BUT VANITY 🤮 Please reconsider this partnership. Animal torture is evil and you’re associating yourself with this.”

“You support saving animals yet you team up with @canadagoose which is a company known for using animals in their clothing? unfollowed. actually makes no sense. you’re someone in a position to make a positive change and call out this type of behavior, but instead you do whatever brings in the most money. you used to be my role model but i can’t support someone with a hypocritical agenda.”

“How could you possibly say that you AND Canada Goose promote kindness and saving animals when you are promoting a company that uses goose feathers and coyote fur to make coats. Absolutely disgusting.”

“This has to be a joke. @canadagoose and the word ‘kindness’ in the same sentence?!”

So… one would have to assume that Upton was made aware of how disgruntled some people were with her announcement. Frankly, I am more upset with her husband’s team cheating their way to a couple of World Series (allegedly), but different strokes and all that.

And if she wasn’t, after Wednesday’s confrontation with a group of animal rights activists she certainly is now.

“Coyotes get shot in the head and they’re strangled to death!” shouted one protester who was wearing a hat with the word “VEGAN” on it. “For Canada Goose! You promote that! What’s the matter with you?! You’re an influencer. You should be promoting kindness and yet you promote violence. Shame on you, you murderer! Shame on you!”

Later in the day, Upton basically pretended the protest didn’t happen, writing, “Had so much fun joining Carly & Danielle at @theSkimm’s HQ this morning! We discussed my career, family, @Strong4MeFit… and so much more.”

Had so much fun joining Carly & Danielle at @theSkimm’s HQ this morning! We discussed my career, family, @Strong4MeFit… and so much more. Stay tuned for the podcast coming soon! pic.twitter.com/ipkbBAvyWs

She also wrote on Instagram that “per usual, the workout was no joke…”

Upton’s idea of fun and jokes are way different than mine.