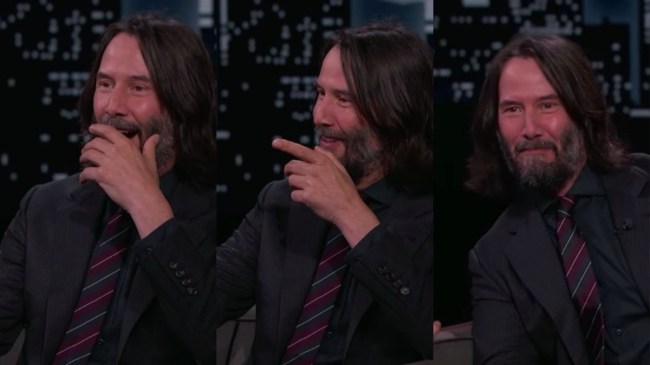 Given that the long-awaited fourth chapter in the epic John Wick franchise doesn’t hit theaters until next March, you might find yourself wondering why the famously private Keanu Reeves is out doing the press rounds on the late-night circuit.

The answer is a predictably awesome Reevesian explanation, as the iconic 58-year-old movie star is promoting the release of a new issue in his own comic book line BRZRKR, which is also set to be turned into a potential film franchise at Netflix.

And while we’re sure BRZRKR is awesome (it’s about an immortal warrior’s battle through the ages), that’s not why we’re here today. No, instead of celebrating his creativity, we’re here to revel in the other aspect of Keanu Reeves’ personality that makes him such a beloved actor, and that’s his almost monk-like persona.

Keanu Reeves is surprised with footage of his 17-year-old self on Canadian television while appearing on Jimmy Kimmel Live!

The latest evidence of Reeves’ zen came on Jimmy Kimmel Live! after the late-night host showed Reeves unearthed footage of his 17-year-old self giving an interview on Canadian television.

“I’m playing a 17-year-old body with a 40-year-old mind, OK?” Reeves said in the footage. “But then I had to play with my conception of 40, which was sort of older, right? You look at a 40-year-old and go, ‘You’re old.’ You know, but he’s not. I mean, Robert Urich, I was watching him, he’s a bouncy guy. And so I was trying to get that in there as well.” After it ended, the current-day Reeves said, “I didn’t know you were gonna do that. Wow, that was a blast from the past.” He then provided some context.

Reeves, who was living in Toronto at the time, was promoting the made-for-TV movie Young Again. He got the gig after auditioning for a “side role, but then they were like, ‘Hey, you could be the guy. One of the guys.’ And I was like, ‘Cool.’” (A natural born storyteller). He continued, “It was a big break for me, because it was, like, a Movie of the Week, it was a great role, and that allowed me to kind of get an agent in Hollywood.” [Uproxx via Jimmy Kimmel Live!]

As mentioned above, John Wick: Chapter 4 – Harakure (the title hasn’t been *officially* announced but all indications point to this being it) will hit theaters in the United States on March 24, 2023.

In addition to the returning Laurence Fishburne, Lance Reddick, and Ian McShane, the cast of John Wick: Chapter 4 is made up of Donnie Yen, Bills Skarsgard, Clancy Brown, Hiroyuki Sanada, and Scott Adkins.