Twitter Clowns On Kevin Hart For Not Being Funny, Hart Responds By Flexing His Wallet, Makes Things Incalculably Worse 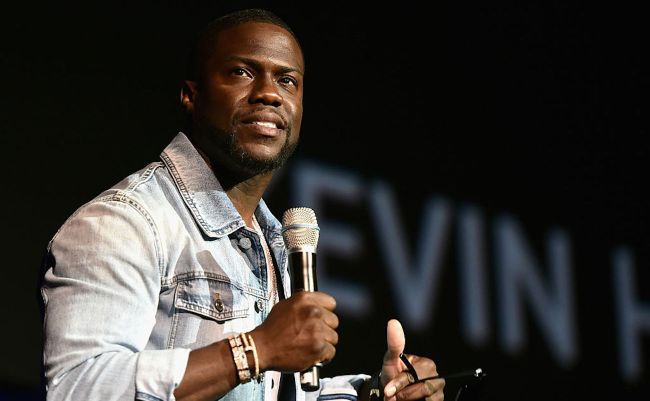 Folks, as the youth would say, Kevin Hart is down bad, as he’s taken to Twitter to not only respond to criticism of his brand of comedy, but flex his wallet, which is certainly one of the most preposterous, actually sort of pathetic things a celebrity can do. “Oh, you don’t like my work? Well, guess what? I make more money than you, losers!” Imagine if LeBron said or did something like this — the internet would have a meltdown. I mean… Hart somewhat literally went with the “I’m rich and you’re poor” move:

But here’s the thing: he’s not down bad! A quick Google search tells me he’s worth approximately $200 million. Now, while there’s no level of fame that’s able to tamper the human nature of being hurt by criticism, especially when that criticism is of both your passion and livelihood, it certainly impacts whether or not you should respond to said criticism. Look at Hart’s buddy The Rock, for example. No one is confusing him with Laurence Olivier or Marlon Brandon anytime soon. But guess what? The Rock doesn’t give a flying fuck because he stacks check the size of skyscrapers.

Hart, obviously, does not have as thick of skin as The Rock (given that the man seems to be made of titanium, that shouldn’t come as a surprise), as his social media lash out predictably made things worse for him:

If I was a rich as Kevin Hart, I would not be on Twitter arguing with working class people about how funny I am. You poors would not be able to reach me by land or by sea.

You gotta take this to instagram bro. That's where ppl blindly worship celebs at. This is a 300k like post over there. It's a ratio over here. https://t.co/bf9cavVYCh

Eddie Murphy apologized for some shit he said way back in the 90s. And circled back around a few years ago to emphasize that he had grown. You either get it or you don’t. Kevin Hart is the architect of his own demise.

kevin hart been famous for too long to still be reacting like this to the people that he claims don't matter. if you all that rich and successful then try adding "unbothered" to the mix.

Kevin Hart cannot accept that he’s rich but not critically well regarded. Meanwhile The Rock absolutely doesn’t give a shit about his critical success if he’s still getting paid.

Kevin Hart supposed to be on vacation enjoying being rich, instead he throwing short man tantrums on the Internet because people don’t think he’s funny 😂😭

Let’s all laugh together 🤣 pic.twitter.com/l9zqTQudQQ

If it wasn’t for Twitter, I would forget Kevin Hart exists. He bout as funny as a paper towel.

When Eddie Murphy had his crossover, he was still funny to *us*. Kevin Hart is the furthest thing from cancelled, he’s actually booked and busy but niggas just not fuckin with it. That’s why he’s reacting.

Eddie Murphy and Katt Williams, two funnier guys than Kevin Hart admitted that comedy could do with some self reflection. Hell, Eddie basically said he could understand where his stand up was considered harmful if I’m not mistaken….. but Kevin Hart is dying on the same hill

Let this be a lesson to Kevin Hart and all celebrities, whether they be from sports, entertainment, or otherwise: when the general public criticizes your work, don’t get offended, get better. And if you *do* get offended, act your age about it and understand that flexing the size of your wallet only makes you look worse. Actually, now that I’m thinking about it, perhaps Hart is so defensive because knows he’s nearing the end of his overextended 15-minutes.