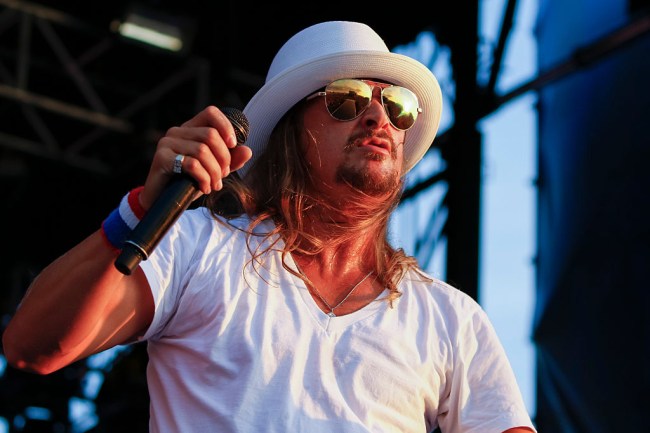 You probably know Kid Rock as the guy who somehow got away with stealing from Warren Zevon and Lynyrd Skynyrd. You may also know him as the singer of the song that always makes you turn off the radio the second it comes on. I’m personally pretty indifferent, and as much as it pains me to admit it, he’s got a few tracks on the “Chillin’ & Road Trippin’ Playlist” that’s embedded on his website that are surprisingly not terrible.

However, let’s not let his music distract us from what I’d like to discuss today: his bar.

In addition to being a can of Monster Energy in musician form, the man born Robert Richie is also a businessman with a portfolio that includes Kid Rock’s Big Ass Honky Tonk and Rock n’ Roll Steakhouse, a bar with a name that just rolls off the tongue located in downtown Nashville.

Much like its owner, KRBHTRNRS has a bit of a rebellious streak stretching back to March, when it vowed to remain open after the city asked dining establishments to shut down in the interest of public health before ultimately caving thanks to the backlash to the announcement.

Like many places around the country, Nashville has begun to attempt to ease back into normalcy in recent weeks by letting bars and restaurants open back up for business and serve customers in a safe and responsible manner—a concept it appears KRBHTRNRS is having a bit of trouble grasping.

Last weekend, someone snapped a picture of the scene inside the bar, which was filled with customers who weren’t going to let some pesky infectious disease get between them and a packed room of people with nary a mask in sight.

The picture eventually came to the attention of health officials in Nashville, who spotted a couple of violations of the emergency ordinances designed to promote public safety, as bartenders were illegally serving people who are currently barred from taking a seat at the bar and the vast majority of staff members apparently decided the whole “mask” thing was too much of a hassle.

In addition to receiving a citation, the city also temporarily suspended KRBHTRNRS’s permit to sell beer for the next five days. It will, however, still be allowed to sell liquor, which definitely isn’t a recipe for disaster whatsoever.

Kid Rock hasn’t released any music yet in 2020 but I feel like it’s only a matter of time until he comes out with a rebellious hit about the need to party during these times that sounds almost exactly like a ZZ Top song.