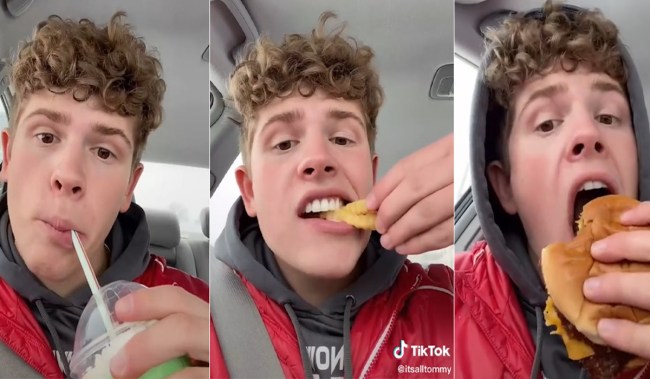 Meet Tommy Winkler, the self-proclaimed “King of Crunch.” Tommy was an early adopter of TikTok and quickly gained a following by posting funny videos and responding to trends.

Then one day he got just bored and ran out of ideas.

“I kind of ran out of ideas, so I was just like, ‘Oh, I’m just gonna record myself and what I eat in a day,’” he told Yahoo! News.

At first, Winkler would create his own food challenges but eventually let his fans decide what he’d eat all day.

For Valentine’s Day, Winkler ate exclusively heart-shaped foods. Another time, he lived off nothing but fruit. He’s also spent the entire day eating nothing but meals from Panda Express, Shake Shake and even did a Lunchables challenge.

People can watch any of those videos on Winkler’s TikTok account.

But it’s Winkler’s latest video that has fans wondering “How the hell does he eat all this crap in one day?”

According to Winker, his most difficult challenge came when he committed to eating 10,000 calories in a day. The video itself is remarkable, but the effort it took from Winkler is even crazier.

He starts off the challenge with a Shamrock Shake from McDonald’s, the chicken tenders, fries, a massive burger, way too many fried chicken sandwiches, a couple of doughnuts, and, honestly, I lost track of all the food. Winkler allegedly consumed 10,233 calories.

The video has more than 6 million views and 829K likes.

So where does Winkler go from here? Hopefully, the gym.

“Eating that much regularly is, obviously, not sustainable. But in Winkler’s mind, none of what he’s doing is. Calorie intake aside, he sees TikTok as having a short shelf life. Someday, he figures, the app’s popularity will cool down — his videos with it.

That’s why, even at 19, he thinks critically about his content. He’s gaining followers on Instagram, and on YouTube, where he films longer-form food trials with his brother.”