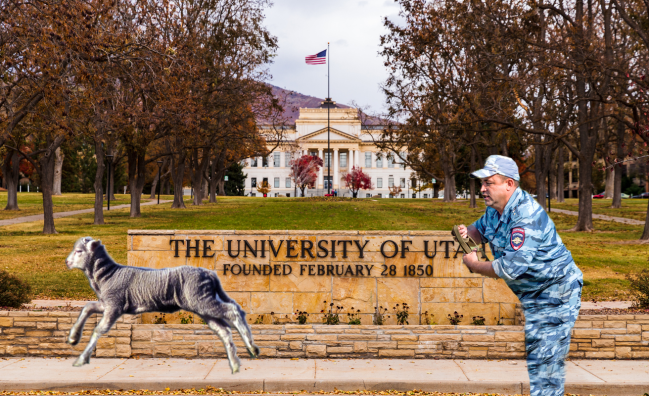 A lamb is on the loose at the University of Utah.

The barnyard animal broke free on late Monday evening or early Tuesday morning and has yet to be caught. Its remarkable escape took place when it was being delivered to the James L. Sorenson Molecular Biotechnology Building at the Salt Lake City campus, where it was to be used to study infectious diseases.

The lamb that got loose was the smallest of the five that were chosen for the study and has evaded multiple attempts for capture. Nobody knows where the lamb has gone but it was last seen near the student union.

Salt Lake County’s animal control department has received tips about its possible whereabouts and believe that it is still on campus.

However, nobody is certain.

“It remains on the loose,” said Chris Nelson, the spokesman at the university. “It pushed past people, and they were trying to get it but couldn’t.”

The lamb has affectionately been nicknamed the “Ewe of U” and many students and faculty have joked that it is trying to find amnesty at Utah State University, which has programs that specialize in farming and agriculture. Others have suggested that he should make a break for it and blend in at the Utah State Fair, which is taking place in downtown Salt Lake.

Avery Holton, chair for Utah’s Department of Communication, captured a photo of the lamb near the Languages and Communication Building.

Added to the list of roles I wasn’t aware I would take on as new Department Chair: Shepherd of Actual Sheep. @UUtah @UofUComm @UofUHumanities pic.twitter.com/9YtYMk6wLs

Animal control officers made an attempt to capture the lamb near the building, but it slipped through their fingertips.

It is unclear as to how the lamb would have been used in the school’s research. But after such an impressive escape, does it not deserve to be pardoned?