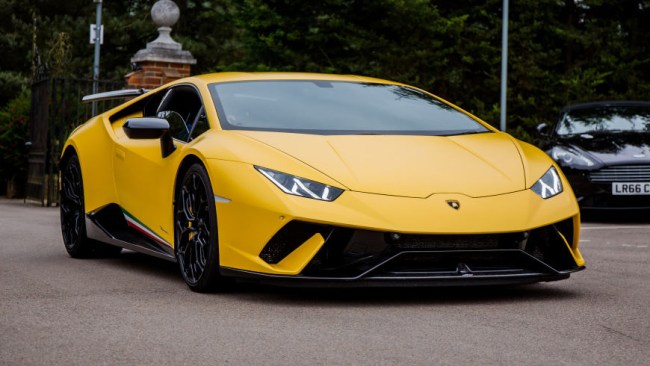 A $275,000-plus Lamborghini Huracan Performante was burned to cinders when an idiot Chrysler minivan owner drove off with the gas hose attached to their vehicle.

Imagine how that would make you feel if you were the owner of the Lamborghini.

Actually, you don’t have to imagine because a friend of the owner of the Huracan Performante, Parker Gelber, posted video of the car melting down to Instagram, complete with very appropriate commentary and caption.

“Yes, that was myself and my friend with the two Lamborghinis at the gas station last night,” wrote Gelber. “We were out driving for a bit and I needed to go get gas. The blue Lamborghini pulled up right behind me. He decided to go in to get us waters and while I was trying to pay for my gas at the pump there was a card error, so I also went inside. As soon as we walked in, we saw a massive fireball out the window. We all ran out of the gas station to the other side of the road.”

“At this point, we had no idea what happened or who’s car(s) were on fire. We dialed 911 and when the fire was out you could see that his car was completely burned down, ours just covered in ash.”

“While talking to police and firefighters a man ran up and said he saw what happened. He was recording the cars to show his friends and caught a guy driving off with a gas pump still in his car. The pump sprayed fuel directly into the Huracan’s engine bay and it instantly ignited.”

“Police found the guy that did it and everything will be taken care of. Just thankful we all got away safe and it didn’t escalate into a bigger fire.”

Watch the carnage below (and swipe right for video of the dumbass in the van driving off, oblivious to what they just did).