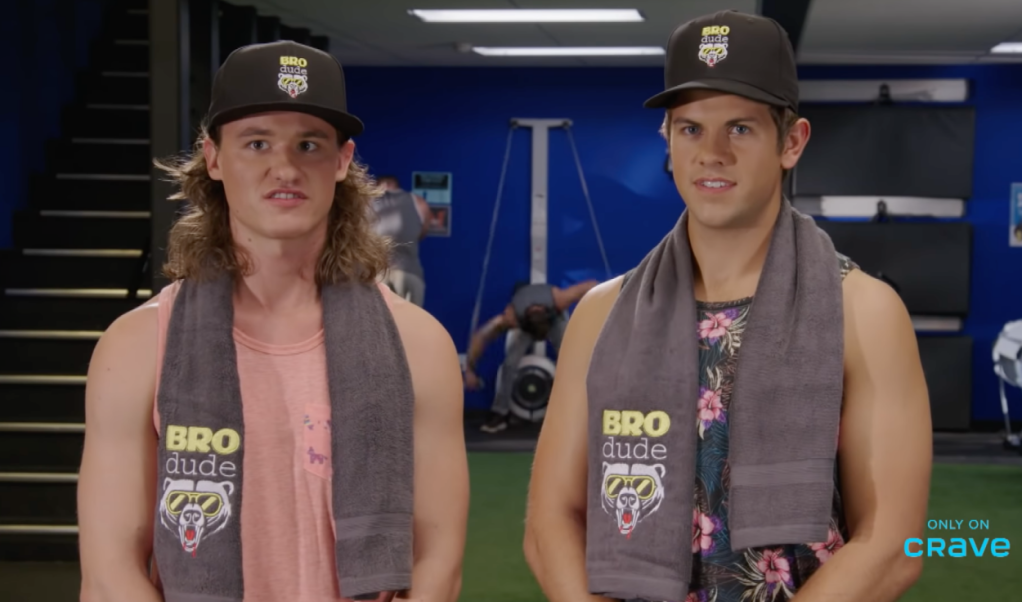 I was able to sit down with the Letterkenny hockey players, Reilly (Dylan Playfair) and Jonesy (Andrew Herr) to ask them some of the biggest unanswered questions about their characters. For example, why aren’t there every any cops in Letterkenny despite everyone always beating the crap out of each other in huge brawls? Or what exactly do the Letterkenny hockey players do to make money and sustain themselves because hitting the gym every day doesn’t pay the bills?

If you are reading this article right now then chances are you’re a fan of Letterkenny. And if you haven’t seen the show before then consider this your lucky day because it’s arguably one of the top comedies on TV and there are 10 seasons available for you to stream right now.

The episodes are short (~30 minutes) and there are only 6 or 7 episodes per season so you can binge it fast and then watch them all again. And the 10th season of Letterkenny premiered the day after Christmas and all six episodes are available for streaming right now on Hulu. 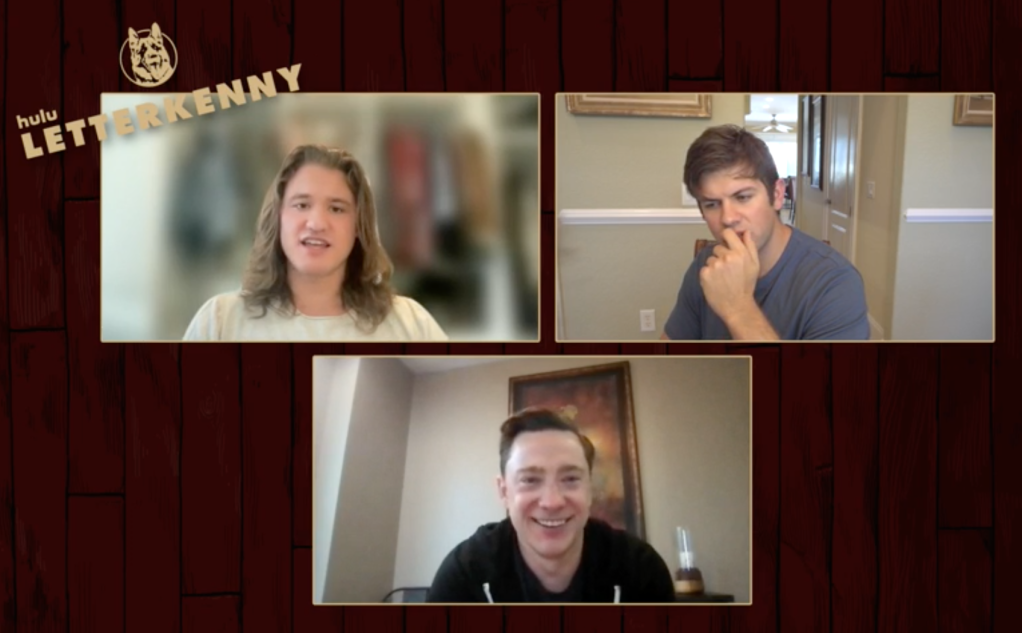 It feels like every season of Letterkenny starts and/or ends with a massive donnybrook. Wayne is the toughest guy in town and has never lost a fight. I did ask them if Wayne will ever lose a fight and they weren’t sure if he would. Dylan added ‘if you lose one it makes you never want to lose another, it puts something inside of you.’ But, I was curious why nobody in the small town ever gets arrested despite massive brawls and here’s what Dylan Playfair (Reilly) and Andrew Herr (Jonesy) had to say about that.

Cass: Are there no cops in small towns in Canada? How is it that you guys can just continuously beat the sh*t out of each other and there’s never been a single cop?

Dylan Playfair (Reilly): That’s a great question. I’ve never heard that one before.

Andrew Herr (Jonesy): That’s a great question. I think when in Letterkenny… Dylan and I both grew up there in small towns and people just… There’s like an honour system when people fight, it’s like no cops are called. It ends with that fight. You know you shake hands, have a beer after and… There are cops in Canada but, yeah. There’s an honor system where like it stays between whoever’s fighting and whatever happens happens, and they shake hands after, yeah.

Dylan Playfair (Reilly): Look when you’re in a small town, you interact with everyone, even the police officers. And from experience, I grew up in Fort St. James, northern BC, and we would have big parties there in the summer time, and I’ve a really great memory of… I think we were 13… My dad had just been hired as the head coach in Calgary, and we had a big shake and a paddy wagon which is like RCMP cop car rolls in and we’re like, “Uh oh, the party’s getting shut down.”

And the cops had come to offer rides home for people and to congratulate my dad on his new job. So I think that’s a very unique benefit of being in a small town like that. You do, oftentimes, interact with the police and they get it. They understand. It’s… Everybody knows everybody, and you can’t away with anything man. I tell you what, you do something, and as the saying goes, ‘bad gas travels fast in a small town’, the rumor mill is a turn­ing, and the police are on that beat as well. So my assumption is that the cops in Letterkenny know everybody and they know that they’re the good old boys.

So we established that there are in fact cops in the fictional town of Letterkenny. The town is actually based on Listowel, Ontario which is a tiny town with a population of 7,530. It’s the hometown of Letterkenny creator Jared Keeso (Wayne).

The fictional town of Letterkenny is home to 5,000 residents. Life in a town that size can be a lot more affordable than living in the city but it still costs money to live. Up until the 10th season of Letterkenny, I didn’t recall a time we ever saw where Reilly and Jonesy lived. And until they started getting that VidVok revenue, I never had any clue how they made money or what they did to earn paychecks. So I asked them about that as well, what the heck they did to get paid because playing hockey. in a town of 5,000 surely doesn’t cover the bills.

Do The Letterkenny Hockey Players Have Real Jobs? Where Do They Live?

Cass: Do you guys have real jobs? Like what is it that you do to support yourselves in Letterkenny?

Andrew Herr (Jonesy): Wait, wait, wait, VidVok revenue. We made so much money!

Cass: Okay, prior to that, for the last nine seasons, because I… Excuse my ignorance, I don’t know the paid tiers of hockey leagues in Canada, the lower league, but I assume there weren’t huge checks coming there, how were you guys supporting yourselves as characters?

Andrew Herr (Jonesy): I think our moms still… We don’t wanna admit it, but I think we still live with our moms and we still eat their food and I think we’re low­key supported, not low key but pretty high­ key actually supported by our moms. That’s why we get so upset when Shoresy is talking about our moms.

Cass: It felt like watching this season, when you guys were playing video games and punching holes in the walls, I was like, ‘Wow, that might be the first time I’ve seen their bedroom. Where do they live? What do they actually do?’

Dylan Playfair (Reilly): If you dig into the hockey culture in Canada, there have been a couple of instances in junior hockey where talented players have had jobs at car dealerships that they never show up for and inflated living expenses that the GMs happen to pass along to their star players. So perhaps there’s some extra meal money that Reilly and Jonesy got from our junior days.

It’s not that expensive when your cost is just sandwiches and gas for your one Jeep that you share with each other so… 200 bucks a week is going a long way for Reilly and Jonesy. And then our VidVok money, I feel like we can live off that for a couple more seasons.

Then we got to talking a little bit about life on the set. Here’s a minor spoiler if you haven’t seen season 10 of Letterkenny, the Letterkenny Hockey Players see viral success for flexing their butt cheeks on camera. I was curious what it was like having to tell their family they were going to buns out on camera this season.

Dylan told me “Nothing they hadn’t seen before” and Andrew followed up with “I don’t think there’s a whole lot of surprises.”

Earlier in the conversation, we got on the topic of the best Letterkenny episodes of all-time. My wife isn’t into the show but I love it. The ‘Fartbook’ episode in Season 1 had her convinced that the entire show is about farts (it’s not).

What Are The Best Letterkenny Episodes Of All-Time

Andrew Herr (Jonesy): The little lines were delivered better than Jesse Eisenberg in The Social Network.

Cass: Do you guys have a favorite episode from this past season or a favorite in general?

Andrew Herr (Jonesy): I think this past season, the ‘Prostate Exams’. It’s probably one of the funnier episodes over the whole series for me, and another one’s ‘Les Hiques’ and ‘Spelling Bee’, I always go back to those two. Those are really, really funny.

Dylan Playfair (Reilly): Yeah, I love those as well. One that I refer to often as far as the camaraderie of the show is super soft birthday, I thought that really set the tone for, I guess that sort of moral compass of, no matter how edgy we get, how much we trip, how much we fight, how much internal conflict there is… We’ve always got each other’s backs, and I think that episode has, showed that really beautifully, how we were all there for each other, and we all come together as a community to celebrate each other. But yeah, this season the ‘Prostate Exam’.

Who Is The Biggest Scene-Stealer On ‘Letterkenny’?

Cass: I was actually wondering about that with relation to all of the sausage scenes in ‘Dyck Meat’ with the Amish neighbor Noah Dyck. That whole character cracks me up, but I wanted to ask you who you guys think the biggest scene-stealer is, whenever they show up. For me, it’s him because the double entendre and everything is perfect.

Andrew Herr (Jonesy): He is definitely a scene-stealer and he’s just such a charismatic guy, the nicest guy in the world. And so charismatic, Dylan’s had opportunities outside of work and he worked with him and Dylan can attest that he’s just, he’s exactly who you think he is and he is a really talented funny guy.

Dylan Playfair (Reilly): He’s on all the time, and it’s just done in an authentic way, he’s very, very funny, he’s very, very quick, he’s very, very intelligent. He wrote that episode, the ‘Dyck Meat’ episode. Jonathan Torrens is a Canadian legend as far as comedy is concerned, so anytime we get to work with people like that it’s great.

As for how much of the dialog between the Letterkenny hockey players is scripted and how much of it is improved, they said that ‘95% of it is written’. We discussed the Art of the Perfect Chirp and their answer was simple, get some writers as brilliant as Jared Keeso (Wayne) and Jacob Tierney (Glen) and you’ve got the perfect chirps. They also said that Jared and Jacob have an open door policy so any time they want to pitch lines they do and the writers listen.

If you are looking for the perfect introduction to the Letterkenny hockey players and/or want a refresher before diving back into Season 10 on Hulu, here’s a compilation of their best lines.

It really is one of the best shows on TV right now. 10 seasons in and it’s only gotten better, faster, and more lovable. Here’s to hoping we get 10 more seasons.