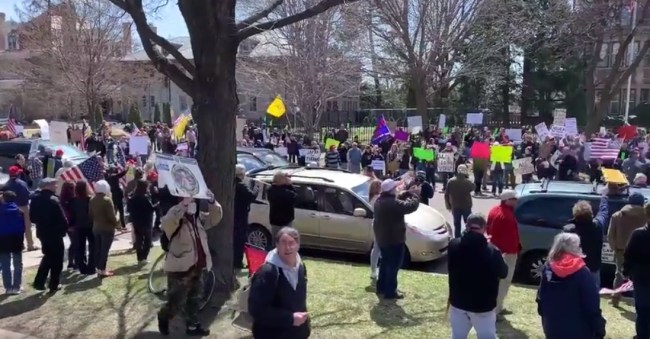 An anti-lockdown group that calls itself “Liberate Minnesota” held a protest Friday afternoon outside Democratic Gov. Tim Walz’s home in St. Paul to show their opposition to the state’s extension of their stay-at-home order to May 4.

“Now is the time to demand Governor Walz and our state legislators end this lock down!”. “Minnesota’s economy must be opened for business or destroying the livelihoods of thousands of Minnesota citizens and their families may result if we don’t act quickly.”

President Trump supported the “Liberate Minnesota” movement in a tweet on Friday afternoon.

As promised several hundred people gathered together outside of the Governor’s house to protest the stay-at-home order.

A sampling of the signs at the protest:

“Walz is the virus.” pic.twitter.com/kbYZXTgcmp

About 200-300 protesters are outside Minnesota Gov. Tim Walz’s residence in St. Paul, calling for the governor to reopen the state’s economy. pic.twitter.com/gRYrJegAZi

The crowd is now several hundred. Impossible to get an accurate count.

The crowd has been mostly civil, though one woman was telling people, “Don’t get near me. I’ve got COVID!” pic.twitter.com/JxE4LmTOrI

I couldn't help but wonder as I photographed today's Minnesota protest.

1. How many didn't know they had it when they came here?
2. How many will get it here today?
3. Did I safely avoid it while doing my job?#COVID19 pic.twitter.com/ms9aJEelC1

DEVELOPING: A crowd of protesters could be seen lining the street in front of @GovTimWalz's residence, holding signs and American flags. Organizers say the stay-at-home order has gone on long enough and Minnesotans should be allowed to go back to work. | https://t.co/AhEEI7mm0b pic.twitter.com/Uuv2h1i6rG

Governor Walz responded to the protests during his daily press conference.

Walz says he'll "fight to the death" for people's rights to protest him but "when you’re advocating for really reckless behavior, that’s a different thing."

Several hundred protesters are in front of his residence this afternoon.

Walz: "The belief that we win and this thing (coronavirus) goes away and gives up – this doesn’t work that way."

It could be cyclical, he says.