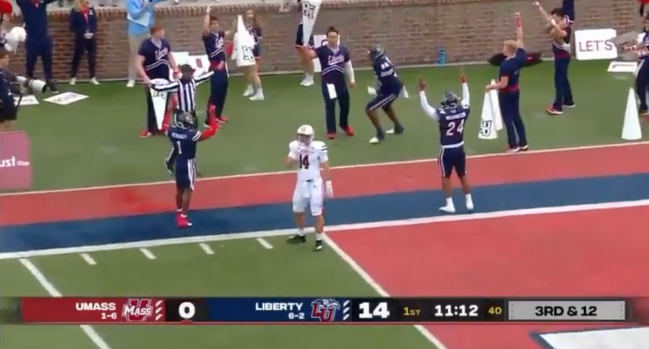 Liberty football is among the best small-school college football teams in the country. Moving the university’s views and beliefs aside, the Flames have quickly become a competitive team on the gridiron under head coach Hugh Freeze.

Freeze certainly has baggage of his own — and that’s putting it nicely — but the man can coach the heck out of some football.

Former Auburn quarterback Malik Willis lost the starting job on the Plains to Bo Nix and Joey Gatewood and chose to transfer to Liberty. He has been absolutely balling out and has quickly risen up the NFL Draft boards.

It’s not hard to see why.

The Flames hosted an abysmal UMass team on Saturday, got out to an early lead and never looked back. However, the best play of the entire day did not come on the field— it came on the sideline.

Early in the first quarter, already down 14, the Minutemen took a shot at the end zone. It was unsuccessful and the ball went sailing out of bounds.

On the receiving end, a Liberty cheerleader held up his megaphone and hauled it in. Even the Flames defenders were impressed by the snag.

The the catch couldn’t have been more entertaining and the reaction from the cheerleader was perfectly nonchalant. Everything about the sequence was awesome, especially the way that Liberty’s defenders seemed just as impressed.

College football is the best.