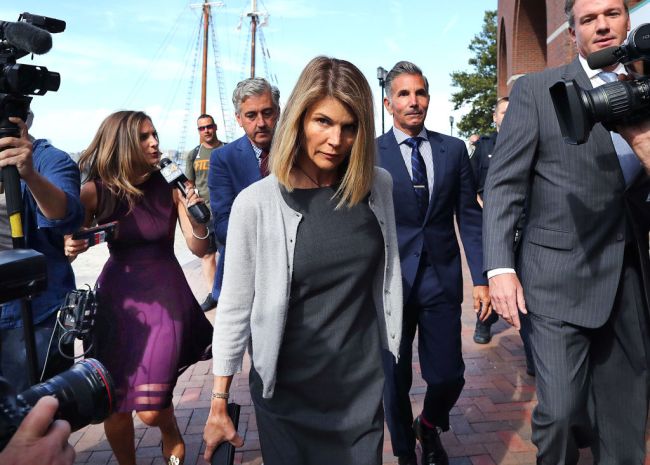 The Lori Loughlin college admissions scandal finally ended on Monday when the Full House star was released from low-security prison, the federal Bureau of Prisons said.

After pleading guilty to one count of conspiracy to commit wire and mail fraud in May, Loughlin was released from prison two days shy of serving two months at the Federal Correctional Institution (FCI) in Dublin, California, according to TMZ. This is the same facility where actress Felicity Huffman served 11 days for her role in the college acceptance scam.

“Lori flew back in style in a private jet that landed early Monday morning at the Van Nuys Airport,” the gossip site added with video of a tarmac full of private jets.

Loughlin gets to go home just in time to ring in the new year, however, her fashion designer husband is still in a prison Lompoc near Santa Barbara, California. He was sentenced to five months for his role in the college scam that got their two daughters into the University of Southern California by making it seem that they were star rowers despite never participating in the sport. The celebrity couple admitted that they paid $500,000 to college scam artist William “Rick” Singer and his Key Worldwide Foundation to get their daughters, Olivia Jade Giannulli and Isabella Rose Giannulli, into USC. Mossimo is scheduled to be released on April 17, 2021.

Originally, the power couple claimed they were innocent, and accused federal investigators of fabricating evidence against them. But they suddenly changed their perspective and copped to charges in May. During her August 22 sentencing hearing, Loughlin told the court via Zoom that she was “profoundly sorry” for role in the college cheating scandal.

“I made an awful decision. I went along with a plan to give my daughters an unfair advantage in the college admissions process and in doing so I ignored my intuition and allowed myself to be swayed from my moral compass,” Loughlin told the judge. “I have great faith in God, and I believe in redemption and I will do everything in my power to redeem myself and use this experience as a catalyst to do good.”

Loughlin will now be on two years of supervised release and will pay a $150,000 fine. The “Aunt Becky” actress will also have to perform 100 hours of community service.

Olivia Jade, who is a 20-year-old social media influencer, appeared on Red Table Talk where she admitted her guilt.

“We messed up. I just want a second chance to be like, ‘I recognize I messed up.’ And for so long I wasn’t able to talk about this because of the legalities behind it,” Olivia Jade told host Jada Pinkett Smith.

On the plus side, Aunt Becky will sure to impress her wealthy Hollywood friends with her new abilities to construct a shiv out of a toothbrush and how to make prison wine out of a can of fruit cocktail.